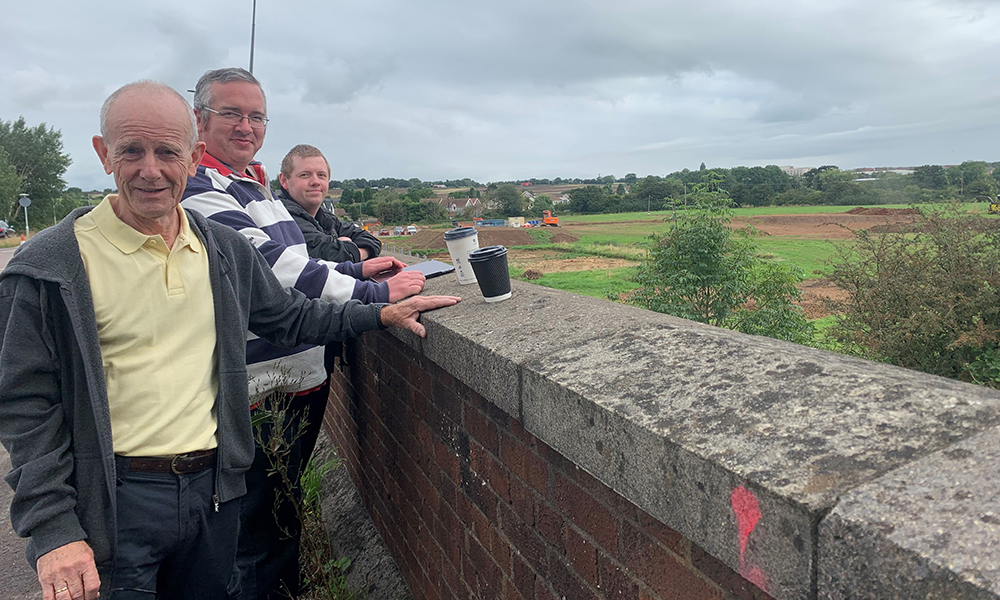 FoSBR members Carol Durrant, Tony Lloyd and Mark Maggs met Cllr Mark Weston at the site of the new Henbury train station on Friday 20th August. We discussed how the station will integrate with new developments in the area, how it will be accessed, and other opportunities for the Henbury line. Mark Weston is one of the councillors for Henbury and Brentry, so is well informed about station progress.

Henbury station will be to the east of the A4018. This site was chosen over the potential “west” site, closer to the original station site near Station Road, following a consultation in 2016.

It is important to get good public transport in place right from initial occupation of the new housing. To this end the A4018 is due to have further bus lane improvements. Also Bristol City Council have prioritised the Stockwood-Cribbs Causeway bus route under their Bus Deal.

Bus routes will be re-assessed as the housing goes up.

The main pedestrian, cycle and vehicle access to Henbury station will be via the access route to the Persimmon housing development. The road will curve around new sports fields from the north (see red arrow below). Flood mitigation design has necessitated green space in this area.

In June, the West of England Combined Authority Joint Committee committed to fund a footbridge. This will connect the A4018 immediately north of the railway to the western edge of the new train station. This footbridge, or ramp, will improve accessibility for passengers approaching the station from the south – on foot or from the bus stops (see orange arrow below).

Henbury station will have a small car park, including disabled spaces. It will not be a park and ride station.

YTL will have large event car parking areas around the Brabazon Arena. They may allow this parking to be used as a daytime park and ride into Bristol from Filton North (Brabazon) station.

Rail services to Brabazon and Henbury are initially planned to be hourly to/from Bristol Temple Meads. YTL are keen to explore direct trains to Bristol Parkway through the Filton Diamond. Portway Park and Ride (where spades should very soon hit turf) could provide useful parking for events at the Brabazon Arena, if passenger services were re-instated along the length of the complete Henbury Loop.

The Henbury Loop would link three of Bristol and South Gloucestershire’s major employment areas: Avonmouth and Severnside, Filton, and Temple Quarter. FoSBR continue to push for the Henbury Loop and hope that high passenger numbers at Henbury and Brabazon on the Henbury Spur will bolster the case for this.

The planning application for Henbury station should be submitted in autumn 2021. The station is due for completion in 2023.