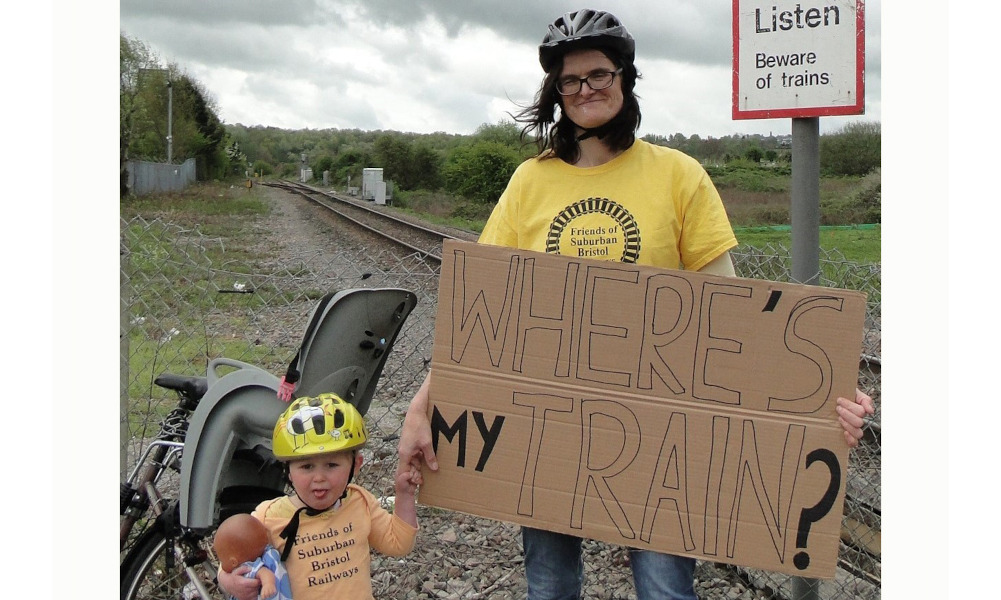 Tina Biggs is starting a postdoctoral research project in January, which involves commuting to Swansea University two days a week. She is therefore stepping down from all her voluntary roles so that she can make sure her family life with her husband and eight year old daughter does not suffer.

Here she looks back on 10 joyful years with FoSBR, and gives some of her thoughts on what goes into rail campaigning:

Highlights of Bristol rail campaigning in the 2010s

Some of you will know that I have found my science background particularly useful. Although I am a physicist rather than an engineer, I have found that a science background gives me confidence to read long reports, sift through the numbers and extract the salient points to be passed on to the rest of the FoSBR team. Sometimes I get very bogged down in detail and need the other team members to give me perspective and quite often just hear me out but tell me that a particular line of enquiry is not going to be fruitful. Other times I spot something really important and the team are happy to dive into the detail with me and help me tease out the main themes. I love that team and really enjoy the committee meetings. Yes, really. We do a lot of laughing and they are the part of my extended campaigning family who I will miss most of all!

My FoSBR journey started, as the best journeys do, at a train station – our local one, Clifton Down. It was 2009 and FoSBR were fresh from the victory of 2008 and were celebrating the first anniversary of what still is our most significant achievement – persuading Bristol City Council, in dramatic Full Council scenes and with vehement arguments with Network Rail, to part with £420,000 a year to fund a second trainset for the Severn Beach Line. The day was celebrated with song, and as Julie Boston relates, I was enchanted and swept on board.

Julie almost immediately took me campaigning into the arena where I still feel the most comfortable – the public forum of the first of many, many council meetings – first Bristol City Council, then South Glos Council, sometimes BANES, and most often the West of England Partnership which morphed into the West of England Combined Authority. Here was where I was most comfortable – having trawled through all the documents for the meeting, extracted some points for the two pages of A4 statement, and having got to know many of the faces in the informal meetings.

What I valued most of all was getting to know the officers – seeing them in action presenting reports, chatting to them afterwards and slowly gaining their trust, so that if I had a query I didn’t need to go through the formal Q&A (though I found that useful to get something in writing I could then publicise), I could simply email the relevant officer.

But what made FoSBR famous were the media events (or as one officer put it, the marches) – getting FoSBR members out on location, holding up placards and either persuading the Bristol Post to send a photographer or taking a photo or video ourselves. We stood on the bridge at Henbury; on Constable Road station; at Clifton Down station and then at Stapleton Road station to demand Filton Bank. Sometimes we got VIPs like the MPs, sometimes it looked a bit rag-tag – but that was FoSBR all over.

Then there were the celebrations – Julie’s retirement party at La Ruca; AGMs in various cafe locations; singing in choir at Temple Meads to welcome in the new evening service and ukuleles at Redland Station and Filton Bank. There was the Awards Ceremony we did one year in Brunel’s Boardroom at Temple Meads Station, where we gave FoSBR awards to artists and schoolchildren and fellow campaigners and community rail organisations. We should do another soon!

So here are a few campaigns with a positive outcome:

But not all our campaigns succeeded. Maybe we sometimes put our hearts ahead of our heads, but that is what rail user groups are sometimes about:

What was funniest was the sour grapes. Not naming names. Talk to me in private sometime!

Tina Biggs is now a postdoctoral researcher at the Energy Safety Research Institute at Swansea University, trying out an idea she has had for electrolysing water to make hydrogen cheaply and sustainably.

Message from the FoSBR Committee

We will miss Tina Biggs and her formidable energy.  The committee don’t always agree on tactics or priorities, but Tina always made strong arguments for her preferred strategies and so often swayed our opinions.

Tina is resilient, bouncing back unworried after criticisms that are part and parcel of transport campaigning in Bristol, an arena with many strong characters who care passionately about Bristol and feel that it has been short changed in transport investment.

Tina worked hard on the early versions of the FoSBR Plan for Rail, a plan that we will take forward and adapt to suit future scenarios.

On the FoSBR Flickr are some photographic highlights of Tina’s campaigning exploits, including singing, swimming (a FoSBR trip to WSM on New Year’s Day!), speechifying, cajoling and hanging around railway infrastructure.  A lot of this was done with her very patient daughter Esther in tow.

And here is Tina on the FoSBR YouTube channel being interviewed by STEM for an education resource project – she talks about her time campaigning with FoSBR and her upcoming research.

Good luck Tina, so long, and thanks for all the fish!