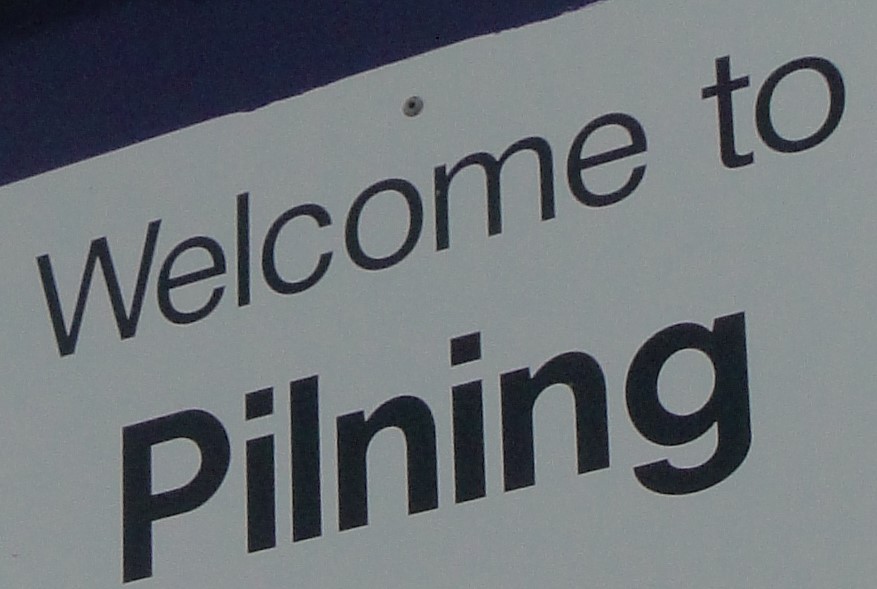 Pilning Station is on the South Wales Main Line, to the west of Patchway, about 2.5km from the English portal of the Severn Tunnel. It currently has a minimal service, but nearby development means it could once again become a very useful transport hub.

Station opens at Pilning on the Bristol and South Wales Union Railway (BSWUR).  The railway runs from Bristol Temple Meads to New Passage on the banks of the Severn, from where passengers transfer onto a ferry to cross the river into Wales.

Station re-sited a short distance away at Pilning High Level when the Severn Tunnel opens. The new station opens with the first passenger services through the tunnel on 1 December 1886.   The original Pilning (Low Level) closes.

Because of electrification being carried out from London to Cardiff, some bridges along the route have to be raised or replaced to permit sufficient clearance above the overhead lines. FoSBR become aware of a rumour that Network Rail plan to remove Pilning footbridge and do not intend to replace it. This would remove access to the westbound platform and therefore no westbound services could call at PIlning.

On 21st April 2016 Network Rail circulate a letter to an unknown distribution list asking for comments on footbridge removal with a deadline of 23rd May 2016.  On 25th May 2016 they circulate another electronic letter stating that the consultation period had ended, any objections received had been “satisfactorily resolved” and as such the works can now be undertaken.

FoSBR put in statements to the West of England Partnership Joint Transport Board (WEP JTB) and the Strategic Leaders Board (SLB) about the lack of proper consultation.  FoSBR write to the Secretary of State for Transport.

A ‘Save Pilning Station’ campaign meeting is held at Pilning station. Speakers from Pilning Parish Council, FoSBR, SevernNet and local residents explain the potential of Pilning and the meeting is reported in the South Gloucestershire Gazette.  Pilning Parish Council write to the Secretary of State for Transport.  Pilning residents complete a transport questionnaire and sign a petition.

Network Rail demolish the footbridge.  There is no access to the westbound platform (towards Wales) so passengers returning from Bristol to Pilning have to travel on to Severn Tunnel Junction, cross over the bridge there and then catch a return train to Pilning on the eastbound track.

SEWWEB propose replacing the existing Pilning station with one 900 metres further west at the point where the Cross Hands Road (B4055) crosses the four-tracked railway.  This location could allow easy access to Pilning village, bus routes and local business parks.

Another proposal suggests moving Pilning station to the point where the main A403 crosses the (two-tracked) railway and creating a combined rail/coach interchange.

Any location needs to tie in with planned new road developments.  The new motorway junction on the M49/Farm Lane site will be complete by end-2019 with stubs “to support future development”.

Pilning Station Group do not endorse the SEWWEB blueprint, worrying that they shift the campaign focus from the station’s survival to the station’s location.

From December 2019, Pilning services (Saturday only, eastbound only) depart at 8.33 and 14.33.  According to Pilning Station Group, the previous timings of 8.34 and 15.34 were more helpful for people who were actually trying to use this limited service for a day out.

Service improvements at Pilning are supported by both the Pilning Station Group and Friends of Suburban Bristol Railways.  Campaigners note that 25,000 jobs are due to be created in the area as part of the Avonmouth Severnside Enterprise Area, and that a new junction on the M49 motorway could allow for a park-and-ride-type station.  Pilning is better placed for fast routes to Wales, Bristol or London in comparison to the nearby, but currently also poorly served, Severn Beach station.

Bristol Arena Bristol Parkway Bristol Temple Meads Bristol to Cardiff Bristol to Gloucester Bristol to London Bristol to Westbury Buses Coalpit Heath Electrification Filton Bank FoSBR Plan for Rail Henbury Line Pilning Portishead Line Severn Beach Line Thornbury Line Wales
Scroll to top
Skip to content
We use cookies to ensure that we give you the best experience on our website. If you continue to use this site we will assume that you are happy with it.OkPrivacy policy