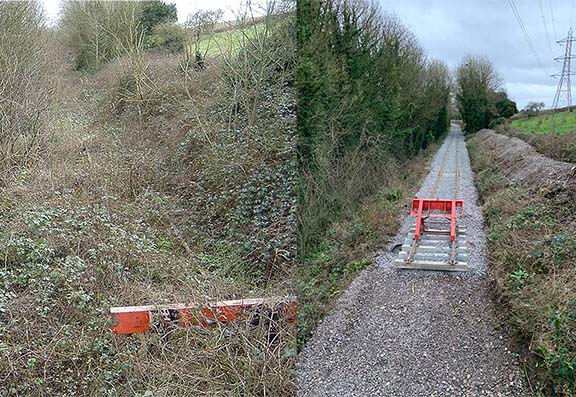 FoSBR supporter Chris P has written an excellent letter to local MP Luke Hall, which neatly summarises current transport issues in Thornbury. These are issues which rail could help to address.

Chris is one of a number of FoSBR supporters in the area who take every opportunity to push the case for Thornbury Line re-opening. He also raises the potential of Coalpit Heath and better services from Pilning.

The July 2019 statement to South Gloucestershire Council Cabinet that Chris refers to can be found here: https://fosbr.org.uk/news/consultations/

I trust you are well.

I am writing with regard to the WECA JLTP4, picking up on previous correspondence that we’ve had regarding provision for rail returning to Thornbury, acting as both a Thornbury resident and member of FoSBR (Friends of Suburban Bristol Railways).

When we last spoke back in 2018 regarding this, you had written to Network Rail to ask them their intentions about the Tytherington line.  Did they ever come back to you with a response?  I know they have been working on relaying track in the headshunt at Grovesend recently, which suggests freight activity recommencing.

Recent changes to the JLTP4 Consultation draft added in a new phrase about “new links to Thornbury and Pilning” and kept Thornbury and the Henbury loop in the longer term aspirations (p91 JLTP4).  Also for Thornbury there is a phrase which assumes an upgrading of Westerleigh Junction, indicating the Tytherington line is still under consideration.  Are you still in support of rail returning to Thornbury, even at this stage in so far as safeguarding a future station site at the top of Midland Way from development?

Have you had any involvement in the Thornbury Neighbourhood plan that’s currently being drafted?  If so, what’s your view on the town’s aspiration for future rail, and what works need to be done to garner further support locally and how can this be done?

One great concern is that future transport plans for Thornbury all hinge on Metrobus, which puts pressure on the A38, which is just one route.  If blocked or closed, or scheduled roadworks are on, this causes major problems trying to get into the north fringe.  I refer you to James Freeman’s open letter in the media recently regarding exactly this and the issues with Metrobus.

We do need to seriously consider other modes of transport to get people in and out of Thornbury over to the north fringe of Bristol without bottle necking on the A38. What is your view on this?  Whether or not Buckover Garden Village goes ahead, or just further development in Thornbury, traffic travelling into the north fringe will be on this arterial route.  The effects of current development over the past 5 years in Thornbury are certainly tangible on the A38 at peak traffic times even now.

Your colleague, Jack Lopresti MP, has spoken publically in support of the Henbury line and also Pilning, especially due to the YTL Brabazon Arena plans, and the opening of ‘The Wave’ at Easter Compton.  This is great news for Thornbury and Alveston residents, as this would be a fantastic facility for those commuting into Bristol and Newport, without the need to get snarled up in the north fringe traffic and the transit times to Temple Meads from Pilning are a far more attractive proposition than going from Severn Beach (approx 20mins v 40+mins).  However to make a truly integrated transport plan for these areas, we need further development of rail from the town of Thornbury so that people can walk to the station from their homes and simply leave cars off the road, using just one single mode, thus reducing carbon emissions and affecting climate change.

If Westerleigh Junction is upgraded, this will allow more train paths to cross the London line coming south from Yate, and improve capacity into Bristol Parkway.  Not just great news for reintroducing trains to Thornbury, however it also opens up the possibility of a station at Coalpit Heath, which is an excellent location for a station.  The 2011 Census showed that 26,000 car users are commuting per day from South Gloucestershire into Bristol.  Coalpit Heath would serve the Emersons/Lyde Green and Winterbourne areas well with room for parking and there’s a rail loop in place allowing London Paddington trains to pass through while local trains are in the station.  It would be good to know why WECA are not considering this? Is this something you support, or could shed any light on?

FoSBR, who I obviously support and am a member of, produced a response to the JLTP4 Consultation draft which I’d be delighted if you could read.

Quite a few questions and comments there Luke, however I’d be really grateful if you are able to answer and lend your support in raising commitment to these projects to ensure they’re not simply ‘kicked down the line’ (excuse the pun), and also if you need anything from me to help you with any further work in support of any of the above, I’d be delighted to help.

I look forward to hearing from you.

We trust that Chris will update us with Luke Hall’s response!