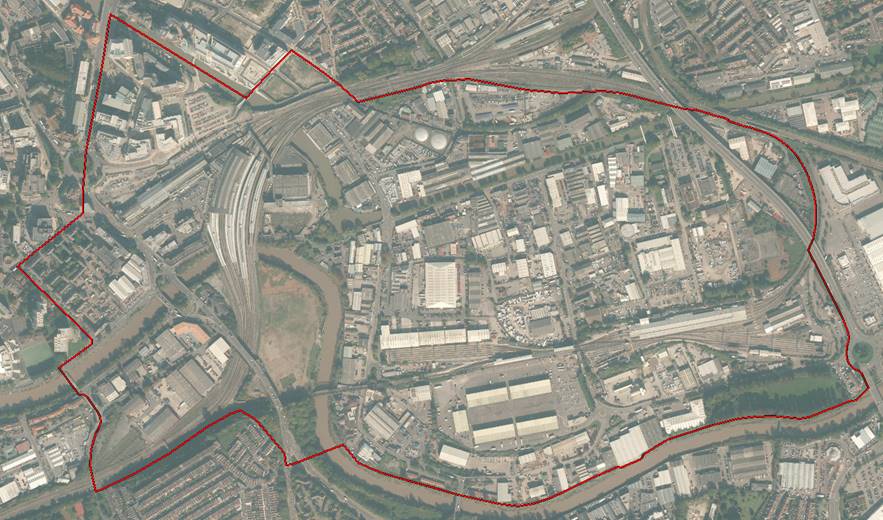 On 27 November, FoSBR representatives attended a ‘workshop’ event at Mott MacDonald’s office in Bristol to review the masterplan for upgrading Temple Meads station.

Temple Meads is an important transport hub for Bristol and for the region. People change trains here, but they also also switch to buses, taxis, ferries, and private cars. To redevelop the station in a way that works well for everyone is a major challenge, because not only is it hemmed in by the River Avon, the Floating Harbour and a major arterial road, but it is also a Grade 1 listed building.

Usage of Temple Meads station is expected to double by 2043, with MetroWest bringing new lines to Portishead and Henbury, as well as improved services and new stations on existing lines.

Perhaps the biggest change in this masterplan is the location of the main entrance. The current entrance at the top of the Temple Meads station incline is cramped and confusing. Arriving and departing passengers cross paths with people buying tickets, and there is little opportunity to add retail outlets. You may be surprised to learn that most users do not enter the station this way. 60% of station users enter through the northern entrance, using the narrow path across the front of the Midland shed. If this masterplan goes ahead, this will become the main entrance to Temple Meads station.

The Midland Shed looks set to become a foyer for the station. Platforms 0 and 1, on the site of the current Signal Box, will be extended to about the point where the path currently crosses. This will avoid the need for a subway or bridge to cross these tracks.

A new entrance to the east of the station will give access to the University development on the old Post Office site. They did not give much detail of this, but it was clear that this will be an entrance rather than a public right of way.

Previous Temple Meads plans included a publicly accessible ‘Station Street under the station. This would have given the University campus a direct link to the area to the west of the station. It has been ruled out because of the cost and complexity of fitting it in to the Grade 1 listed vaults. The new pontoon walkway to the north of the station will however make it easier to get from the campus to Friary.

The artist’s impression also showed a footbridge to link the platforms outside the main train shed; apparently this may be required in future to boost the capacity of the subway.

Terminating buses will be moved from the station incline to the Friary. This caused raised eyebrows because the new, nearly complete road scheme at Temple Gate may not accommodate this very well.

Cycle parking will be ‘decanted’, first to a temporary containerised facility at Friary and then later to a high quality cycle hub capable of accommodating 800 to 1000 bikes.

A new multistorey car park (with cycle parking) on the southern side of the River Avon will replace all the staff and public car parking in the Midland Shed area, on the incline and in the current Temple Gate multistorey. A path along the trackbed of the current Fish Dock siding, crossing the river and Cattle Market Road on the railway bridge, will allow quick, easy, level access into the southern end of the station near Platform 2.

The pedestrian area in front of the (current) main entrance is to be extended, moving vehicles further away from the station building. The only private car parking retained here will be for disabled users.

Taxis will continue to use the Incline. This drew criticism from a taxi drivers’ representative, who felt that taxis and buses should be in the same place.

Retail is a very important for major modern stations. Station retail is one of the few areas in the sector that is still experiencing growth, and everyone recognises that Temple Meads currently has a very poor offer. These plans allow for a significant expansion of retail outlets. It is recognised that units need to reflect Bristol’s special ‘independent’ streak, so they will be fitted out at a level which will appeal to independents.

The main criticism of accessibility concerned the distances between modes. People who arrive by train and wish to travel on to places such as Wells or Cheddar, for example, will need to go at least 250m to reach their bus at Temple Gate. Even local terminating buses will be over 100m from the station.