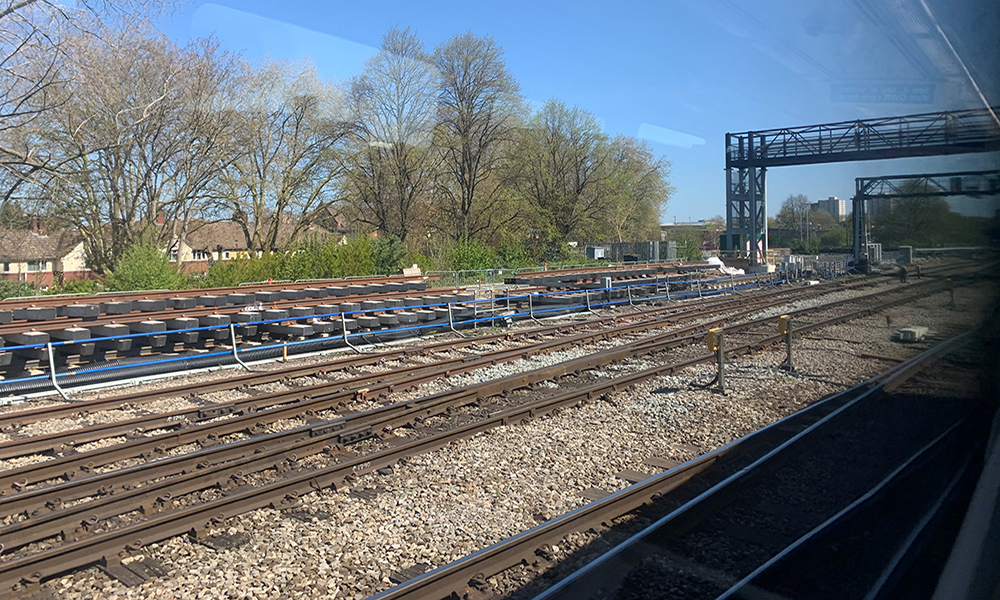 Network Rail have been preparing for the upgrade of Bristol East Junction for several months. There will be alterations to the summer timetable to allow these major works to take place, with completion due by autumn 2021.  The refurbishment of the roof at Temple Meads will take place over a longer timescale, being scheduled for completion in 2023.

Bristol East Junction is located to the east of Bristol Temple Meads, where the four Filton Bank lines leading to south Wales, Bristol Parkway and the Midlands meet the lines to Bath Spa and London Paddington.

The remodelled junction will improve capacity, reliability and operational flexibility, so that all lines can reach all station platforms.  An extra line is also being introduced, to support additional MetroWest suburban services.

Network Rail have been carrying out many advance works since March 2020.  This includes track replacement (ballast, rails and sleepers), points replacement and moving and replacing signals.

A substation and a relay room were demolished and replaced to accommodate foundations for a new five track span gantry beside Dings Park.  This has been built to electrification clearance height in anticipation of the deferred electrification to Temple Meads.

Network Rail are currently extending the length of the platforms at Bedminster station for longer trains, so that it can act as a southern terminus for the 4 day period when no trains can use Temple Meads this summer.  Running trains as far as Bedminster will reduce the length of replacement bus and coach journeys northwards.

Network Rail refer to the platform re-surfacing and coping stone repair as a temporary measure.  GWR have said they would welcome the operational flexibility to stop longer trains at Bedminster on a permanent basis.

Points and signals for the new layout will be completed during this blockade.  The new gantry will remain beside the existing structure until the latter stages of the summer blockade, when signalling will be transferred to it and the old gantry demolished.   Two out of four Filton tracks will be kept open for a significant proportion of the blockade, thereby reducing disruption.

The Severn Beach Line will be affected on various dates during the blockade:

Other service impacts on various dates during blockade include:

For the period from Tuesday 31st August to Friday 3rd  September, NO trains will call at Temple Meads.  Bedminster will be the terminus for GWR Weston-super-mare /Taunton services:

Check before you travel

GWR are agreeing these amended train services with Network Rail and final timetables will be confirmed by the end of May.  There is a dedicated webpage on the GWR website which has a full breakdown of the service amendments.