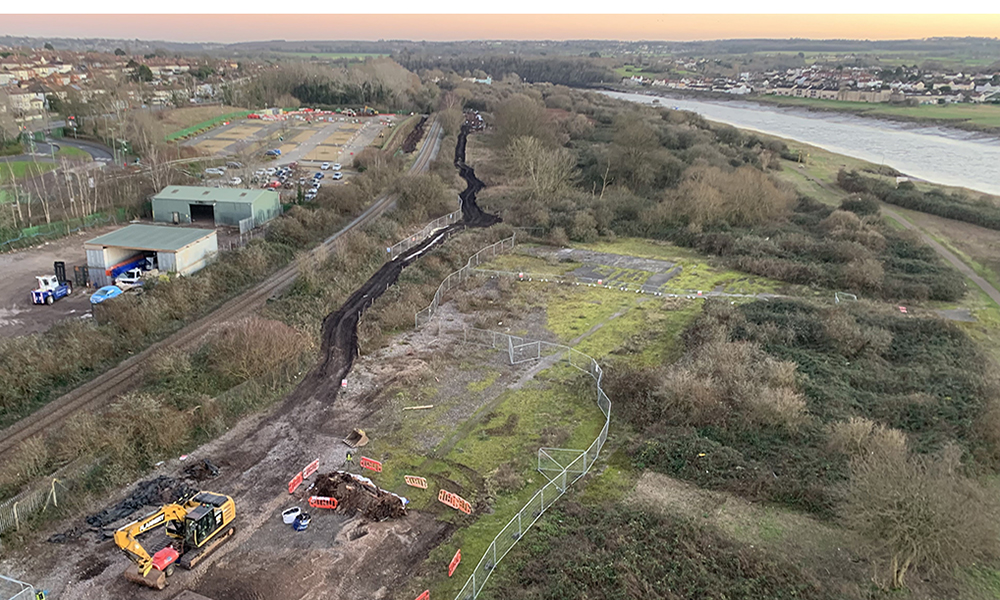 Construction work by Bristol City Council and Network Rail at the Portway Park and Ride station site is finally underway. The £4.2 million station, part of the West of England Combined Authority’s wider MetroWest plans, is billed as the first new railway station within the City of Bristol since Parson Street was built in 1927. Bristol Parkway (1972) and Filton Abbey Wood (1996) are both in South Gloucestershire.

GWR expect the station to be in use by summer 2022.

Portway Park and Ride station is located on the Severn Beach Line, 800m from Shirehampton and 1600m from Avonmouth.  It will benefit from the recently improved half-hourly service between Bristol Temple Meads and Avonmouth (hourly to Severn Beach).

The station adjoins the existing bus-based Park and Ride, on the A4 near junction 18 of the M5. It is designed to provide a useful extra transport option for the local community, as well as providing Park and Ride users from further afield with a rail option to destinations along the Severn Beach Line or for onward travel on the wider rail network from Bristol Temple Meads.

Network Rail will be doing engineering works between Saturday 19th and Sunday 27th February 2022, which is half term week.  They will be completing Bristol East Junction improvements by replacing track on the relief lines from Bristol Temple Meads to Filton Abbey Wood.

During this week, engineers will also relocate a signal from the south to north side of the line at Portway Park and Ride station to aid with station despatch. They will also work on the concrete platform foundations.  Additional work will be carried out in the Clifton Down Tunnel to improve drainage.

There will be no services on the Severn Beach Line, and trains will not call at stations between Bristol Temple Meads and Filton Abbey Wood.  A rail replacement bus service will be in operation and rail tickets will be accepted on scheduled local bus services

Full information about train service alterations can be found at:

At our AGM on Friday 28th January, the GWR Project Manager Ian Mundy updated FoSBR on the station design.

The station will have two entrances (north and south).  The south entrance will be brought into use when the station opens but will see greater use when the car park is extended, as planned by Bristol City Council.

The operational length of the single platform will be 126m long and 3.3m wide, allowing a 5-car train of 23m formation to call.

The station will be fully accessible and PRM (Persons of Reduced Mobility) compliant.

There was a site photocall on Thursday 27th January with representatives from GWR, Network Rail and Bristol City Council.

It’s really exciting to see work starting on the first new rail station within the city in almost a century, and this is a major milestone for the project.

Portway Park & Ride station will improve connectivity to the rail network for the local community and more widely for users of our Park & Ride site, allowing many more people to choose to travel by rail to work, study and for leisure.

Work is also progressing on the Avonmouth Severnside Enterprise Area (ASEA) Ecology Mitigation and Flood Defence Project. The project area stretches from Lamplighter’s Marsh in the south to Aust Cliff in the north.