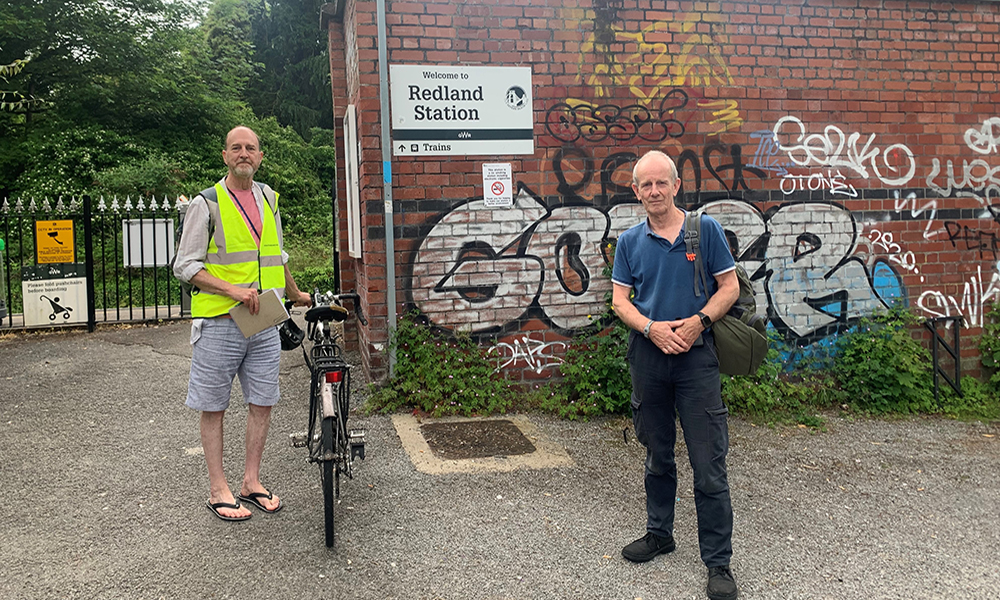 Redland train station is a local station on the Severn Beach Line, between Montpelier and Clifton Down. On Thursday 10th June, FoSBR’s Carol Durrant and Tony Lloyd met local Councillor Martin Fodor. They looked around Redland station and discussed opportunities for improvement.

There are several ways that Redland station could be improved:

Cllr Fodor has promised to raise the Redland issues with the station manager, so we are waiting to see what can be done.

We also updated Cllr Fodor on wider FoSBR campaign aims, such as our goal of a fifteen minute frequency on the Severn Beach Line.  WECA currently propose (as a longer term ambition) to re-double the line from Narroways Junction to Montpelier to allow a 20-minute service to Avonmouth.  FoSBR want to see the line re-doubled from Narroways to Clifton Down, which would to allow a 15-minute frequency and better reliability.  Re-doubling would require platform changes at Montpelier and Redland, so we peered at the remains of the old westbound platform on the Cotham Gardens side of the line.

Another FoSBR campaign is to make local railway stations better interchanges with active travel modes and bus services that reach across the city.  There is a Voi scooter parking zone on the corner of Redland Grove and South Road, and local bus stops are placed reasonably close to the station entrance.

Many thanks to Cllr Fodor for taking the time to meet us.