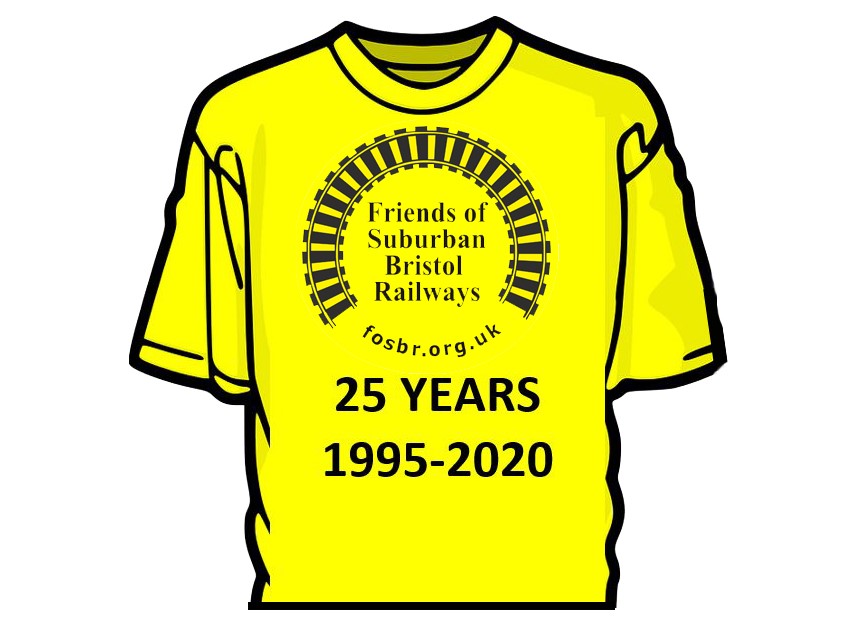 For decades campaigners have fought off threats to the Severn Beach Line’s survival, and argued that it should be developed as an important part of the regional transport network. 25th September 2020 marks the 25th anniversary of FoSBR, who have played their part in safeguarding the Severn Beach Line as a vital local link.

Here, FoSBR’s Tony Lloyd gives a potted history of how the Severn Beach Line was saved.

The Beeching report of 1963 recommended that the passenger service on the Severn Beach line be withdrawn but, due to representations by staff and customers, this did not happen.  The threat arose again in 1967 and Chris Hooper, who worked at Avonmouth docks, recalls a packed, public meeting  in Shirehampton. The guest speaker was the Temple Meads station master who explained that the line had to close. The meeting rejected his suggestion and he stormed  out of the meeting in a rage.  Luckily, following an inquiry, it was agreed that the line be kept open – albeit with a reduced service.  Staff were withdrawn from all stations along the line except for Temple Meads and fares were collected on the trains – the reduced costs from this resulting in reduced fares.  In the 1970s, most of the track was reduced to single line except at Clifton Down and Avonmouth stations.

The forerunner of FoSBR was the Severn Beach Line Passenger Association (SBLPA).  Chris Green, a 15 year old from Shirehampton, decided to prove the importance of branch lines by chartering excursion trains. These stopped at all Severn Beach line stations on the way to various exotic destinations and were paid for by the fares collected.  The first, called the ‘Local Loco’ was in 1979 to North Wales and Chester; many others followed until 1987, going to locations throughout the UK – including London, Edinburgh, Lake District, Nottingham –  and even Boulogne in France.

Tireless work by others in the SBLPA, such as Clive Farquhar and David Collingborn (still members of FoSBR), harried the authorities to improve services and stations with some successes, including the (temporary) reinstatement of a Sunday service.  The SBPLA also produced a quarterly newsletter (‘Newsline’) which included wonderful artwork by the late Mike Baker.  The Association faded away in the early 1990s as the Committee members moved to pastures new.

The Severn Beach line service struggled on despite threats of cut backs and possible line closure, but with some financial assistance from the local authority.  Punctuality and cancellations were a problem.  If a train was required elsewhere at short notice, then often the one on the Severn Beach line would be borrowed to fill this gap.

FoSBR started at 07.30 on Monday 25th September 1995 in protest at the reduction of commuter services to Severn Beach.  Organised by a 24 year old cyclist, about 20 people with bikes or buggies gathered at Avonmouth station in front of TV and radio outlets to show that that a bus service from Avonmouth was no substitute for a train.  Julie Boston, Peter Gould and others then carried on with the campaign to improve services.

In the early 2000s, Network Rail wanted to cut off-peak weekly trains to a 2 hour frequency but Bristol City Council provided an annual subsidy of some £120,000 which permitted an hourly service after considerable pressure from FoSBR and others.   Then in 2006, the council voted to withdraw the entire subsidy for the line.  This drew howls of protest and, after vigorous campaigning, especially by Cat Hobbs (then FoSBR’s Press Secretary), the subsidy cut was reversed.  The Council agreed to pay £450K per year for 3 years, starting in May 2008. This permitted the use of a second train which dramatically improved punctuality and gave a 40 minute service during the day.  In turn this resulted in a significant increase in passenger numbers year on year – with annual passenger journeys increasing from around 450,000 in 2007/8 (pre-enhanced service) to 1.4 million in 2019 (pre-COVID).

Since 2006 the Severnside Community Rail Partnership has worked with local communities to encourage the use of local trains on routes radiating from Bristol, including the Severn Beach line. They deliver station improvement projects with the assistance of volunteers, schools, youth groups and the Community Payback scheme.  They also host events and educational activities to encourage sustainable, healthy travel.

In 2011 the subsidy was reduced by half because of the large increase in passenger numbers and in 2014 it ended because DfT took over the enhanced service into the First Great Western (now GWR) franchise.

The enhanced service from 2008 was a real game-changer for the Severn Beach Line and, coupled with the recent four tracking of Filton Bank and the coming MetroWest services, should ensure a good future for this local line in the post-COVID world.

For many years since the 1960s, the line has been under constant threat, not only by direct closure but also by benign neglect – by letting the service run down so much that passengers would seek alternative modes of transport.  Constant campaigning has prevented its demise – and now it is recognised as an important part of the local rail network.

FoSBR continue to campaign for further improvements to local rail services and facilities. If you would like to support these efforts, and receive a newsletter three times a year, join FoSBR.

COVID-19 prevents us from holding any large celebration for the 25th anniversary of FoSBR.  However, we are keen to hear your stories of local rail, and we are meeting Friends in small groups (less than six) in a socially distanced manner along the line. Please email us if you would like to be involved.

You can also join in the celebrations by buying a ’25th anniversary of FoSBR’ Tee-Shirt for just £10. Email us to reserve one, or call Teresa on 07765 114631 but hurry, they’re selling fast!

And most importantly, stay safe everyone!