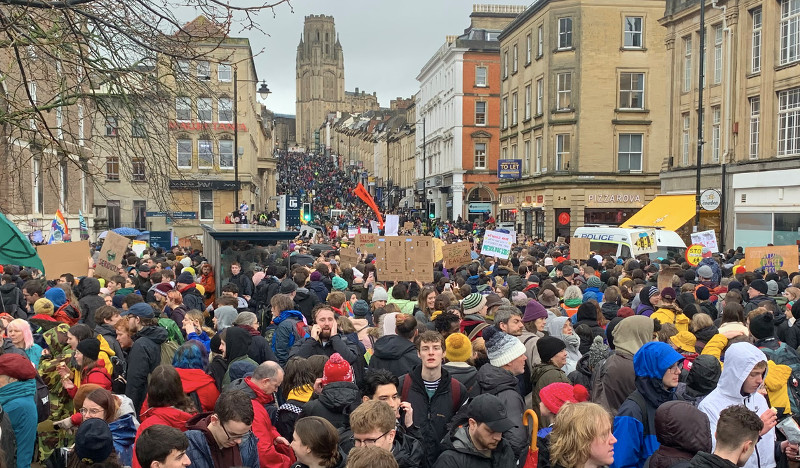 Greta Thunberg spoke at the Bristol Youth Strike for Climate gathering on 28th February 2020. Graham Ellis, FoSBR member and administrator of the Great Western Coffee Shop Forum, gives his impressions of the day:

They came in tens, hundreds and thousands to what has been described as the largest protest ever in Bristol. And that’s truly remarkable on a wet February weekday. They (or should I say “we” because I was one of them) want to make known our concern at climate change induced by human behaviour, and the need for all the human race together to take steps to stabilise (at the least) the damage we have been causing before it’s too late.

I thought long and hard about going along on Friday – attending the event in itself isn’t going to stabilise or reverse anything but I feel at the moment that there is a need to drive this subject up the agenda, from ideas to thorough talk to plans and to action. There is a need for all those steps and they are not mutually exclusive. So I celebrate the highlighting of the issue by the organisers and the help in that highlighting from keynote speaker Greta Thunberg, just as I celebrate steps we all take in our daily lives to consider our footprint, and I celebrate the hard work that is being put in by some individuals to bring corporate or government action to bear.

They came in their thousands. They filled College Green. And if you zoom in, a sea of people made up of many individuals just like you and me.

Well – not all exactly alike. Whether you are female or male, young, young(ish) or old, brightly dressed to show your green credentials wearing your badge proudly on your forehead, or hidden in a drab outfit and wearing camouflage paint, you came along. Whether you’re happy to be there or worried that the air may not be clean, but along never the less.

Whether you maintain a sense of humour in spite of the seriousness of the issue or not, whether you were self-propelled or not, and whether you watched the march after the speeches or walked with them in extended protest – in the crowd in small groups or larger ones.

Overall impression? What a fantastic display by ordinary people from all walks of life, backgrounds and ages saying “we care”. We don’t necessarily all subsrcibe to every single idea that was there on a poster or even tannoyed out by all the various speakers. But we do know this is something that needs to be highlighted and taken forward, and with urgency.

What was missing from the day? There was no trouble. There was no litter. There were no bad tempers – just good humour. A restoration of faith in the ordinary human being.

We’d like to thank the Bristol Youth Strike 4 Climate volunteer stewards, parents, carers, schools and youth organisations for working with public and emergency services to help the event run smoothly.

A “thank you” from me too – to the police for being there (with little to do), the ambulance services, the organisers, and all the individuals too.