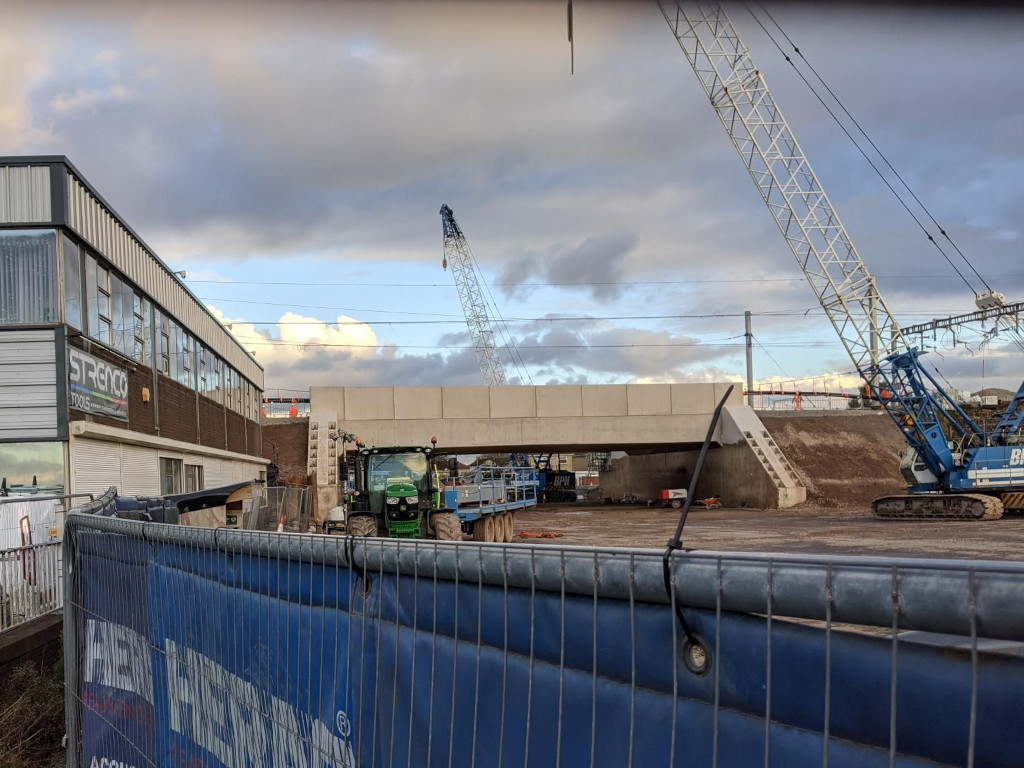 The railway bridge over Gipsy Patch Lane, some 300m south of Patchway Station, is being replaced. This is part of the Cribbs Patchway MetroBus Extension (CPME) scheme, which will allow double deck MetroBus services to run between Bristol Parkway train station and The Mall at Cribbs Causeway. This video shows the new route.

Train services between Bristol and South Wales have been temporarily suspended while this work continues; at the time of writing the lines are expected to reopen on 23rd November 2020.

A 4,260 tonne replacement concrete bridge was pre-fabricated in a yard next to the railway line, ready for slotting into place after completion of enabling works.

The new bridge is significantly wider and higher than old one, providing two lanes for general traffic, a bus lane in each direction, a 5m-wide shared use cycle and pedestrian pathway on the south side and a 3.5m shared use path on the north side. It was not practical the raise the level of the railway, so the road level will be lowered by about 1.7m to provide sufficient headroom for double-deck buses and other large vehicles.

The bridge move was postponed from the Easter period to the autumn because of COVID-19.

The old bridge was taken down on the night of Monday 26 October and the new bridge was due to be moved into position by 7 November. However during the operation some of the modular transporter’s wheels got stuck in the soft ground, resulting in the bridge being grounded 30m short of its target position. Urgent work was carried out to place materials under the wheels to gain traction, and just over a week later the new structure was finally moved into place.

Train services will continue to be diverted until the remaining work to rebuild the embankment and rail systems are completed.