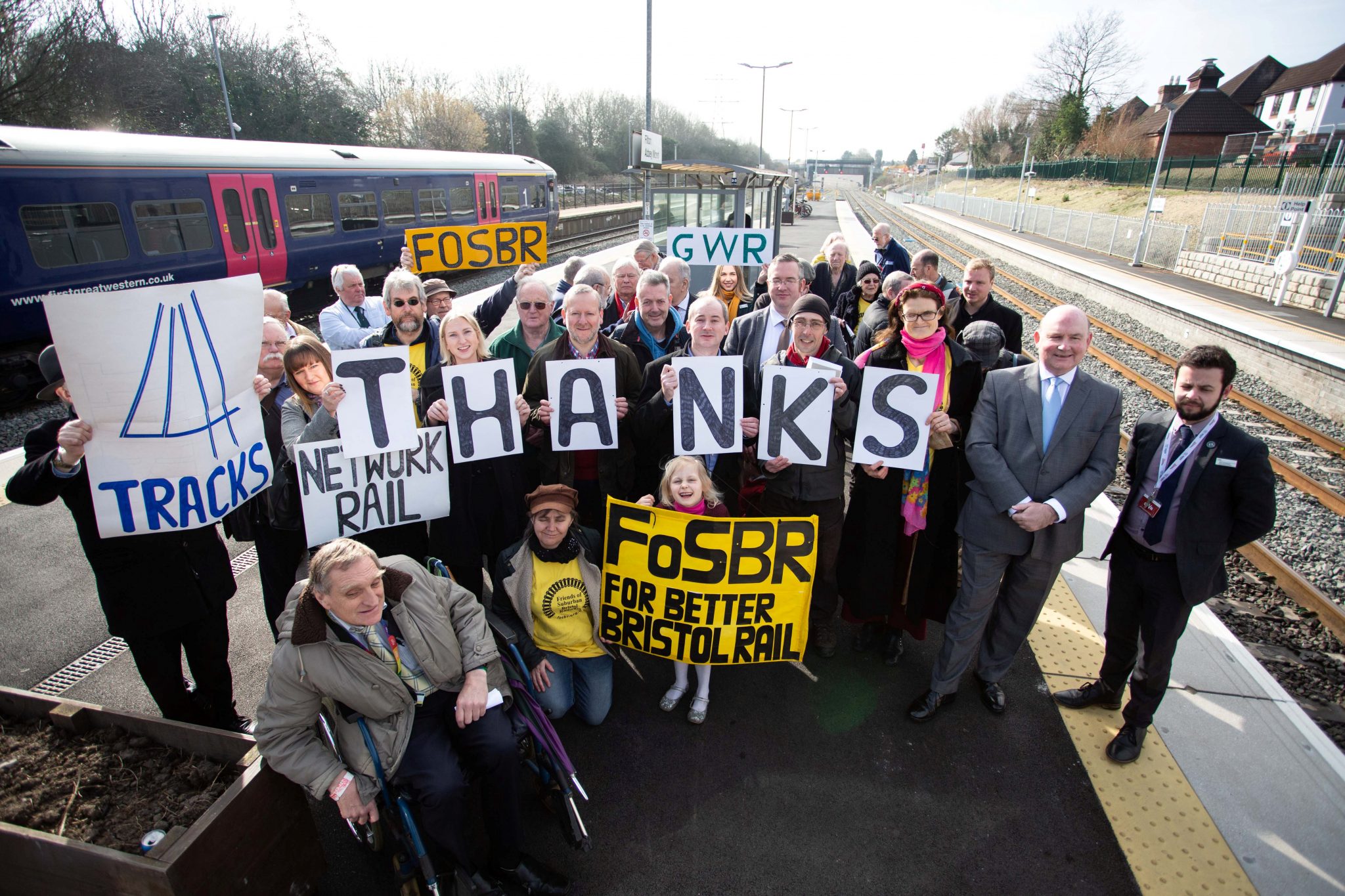 On Friday 22nd February 2019, FoSBR held a “party” on the platform at Filton Abbey Wood railway station to celebrate the success of the four-tracking of Filton Bank.

Network Rail completed the bulk of the engineering work in November 2018. The extra two tracks have resulted in a substantial improvement in recent reliability of local services as local stopping services now run on separate lines to the faster intercity services.

Those present shared a “four-track” themed cake and sang Morningtown Ride accompanied by a ukulele – “Rocking, rolling, riding, via Abbey Wood, all bound for Temple Meads, not so far away” (apologies to The Seekers).

I’m delighted with the new platform at Filton Abbey Wood, which supports my ambitious plans to improve our rail network, including direct services between Severn Beach and Bath, re-opening Henbury station and a brand new station at Portway. I am also working with North Somerset Council on plans to re-open the line to Portishead. I am committed to working with all partners to ensure the West of England has a railway service that is fit for the future.

Tim Bowles further spoke of potential for a “turn up and go” service, i.e. one that improves upon the 30-minute service currently promised by MetroWest.

FoSBR and others campaigned for a long-time for the Filton Bank four-tracks to be re-instated and we are delighted with the success of this Network Rail project. Now, we would like to see an improvement in the frequency of services to local stations from December 2019, eventually leading to a half-hourly and better service to all Bristol local stations.

FoSBR would also like to see the much needed capacity improvements at Bristol East junction and the electrification of the Filton Bank to allow trains to travel under electric traction between Bristol Parkway and Bristol Temple Meads.

Bernard Kennedy of ASLEF spoke of the removal of the tracks in the 1980s due to the Serpell report, how Filton Bank is the spine of the local rail network and how, as a Cross-Country train driver, he is now regularly signalled to run on the main line alongside local services on the relief lines, a situation where previously one or other train would have been held.

Stephen Williams, ex-MP for Bristol West, remarked on the long gestation periods for these projects. Martin Garrett of Transport for Greater Bristol commented on the potential for bus-rail interchange at Filton Abbey Wood station, and how the bus stops could be tweaked to optimise the transport hub.

Keith Walton of Severnside Community Rail Partnership spoke of the partnership’s efforts to make local stations welcoming to encourage passengers. Volunteers are always welcomed to help with projects such as maintenance of platform planters, eg, at Filton Abbey Wood. Please contact Keith directly if you are able to help.

This vital piece of track work has created a better railway for our customers, up to 30% more punctual services on the Severn Beach Line, and in time will allow customers to take advantage of the full benefits of new Intercity Express Trains. Subject to Network Rail timetable approval, later this year we hope to more than double the number of services between Bristol and London.

This upgrade has already eased congestion on the railway across Bristol and the two new tracks will also allow more frequent services and quicker journeys to be introduced between Bristol and London Paddington later this year.

This will provide more seats and better journeys for passengers as well as a real boost for the region’s economy.

The £130m upgrade programme began in 2015 and included installation of 15 new track, new crossings and signalling, and a new platform 4 at Filton Abbey Wood. Some work is ongoing, such as the completion of ramps to enable step-free access to platform 2 at Stapleton Road.

The new lines provide the capacity for an increase in direct London – Bristol Parkway – Bristol Temple Meads services that will be introduced from December.