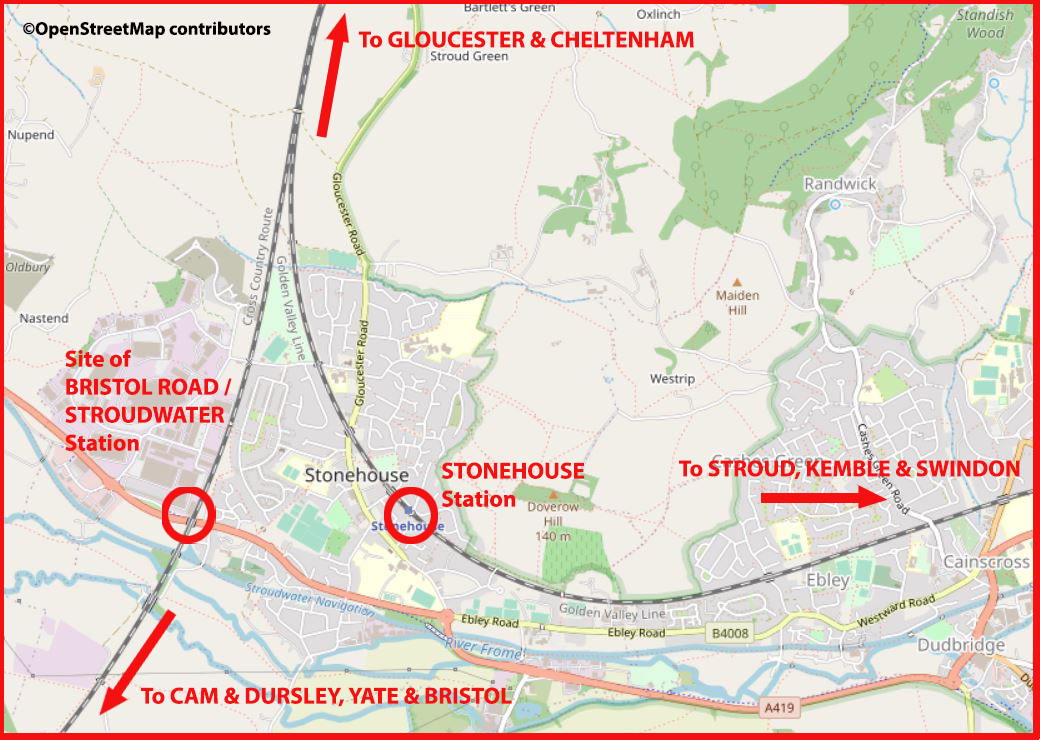 Carol Kambites of Stonehouse Town Council contacted FoSBR in July to ask us to support the Stroudwater Station campaign.   The proposed station is at Bristol Road, Stonehouse, on the Bristol to Gloucester line between Cam & Dursley and Gloucester.

The current Stonehouse station is on the Golden Valley line between Gloucester and Stroud.  Stonehouse station is less than 1.5km from the Bristol Road site, but rail travellers from the Stroud Valleys who wish to travel towards Bristol and the south-west need to begin their journey by travelling north to Gloucester or Cheltenham, or east to Swindon. The Stroudwater Station campaign aims to provide a direct link between the Stroud Valleys and Bristol.

In practice most people currently drive all the way to Bristol, or go Cam & Dursley to pick up the train.

Stonehouse Town Council applied to the Restoring Your Railway fund and, although initially unsuccessful, the bid was identified as having potential for the next round of the New Stations fund.

After discussion amongst the FoSBR committee, we decided that the potential ridership from the station could build a strong business case and therefore we have added Stroudwater to our FoSBR Plan for Rail map:

The “Reopen Stroudwater Station” petition has over 800 signatories (as at 25th August) and can be found here: https://glostext.gloucestershire.gov.uk/mgEPetitionDisplay.aspx?id=68

Gloucestershire County Councilllor Nigel Moor stated that “We are aware there are limited opportunities for new stations along the line so we need to make sure any decisions we make provide the maximum benefit to Gloucestershire residents.

“We are interested in exploring the options presented by the Government’s New Station Fund and will be involving partners in these discussions to make sure any changes to the network meet the needs and vision of the county both now and in future.”

The West of England Combined Authority (WECA), which incorporates South Gloucestershire, agreed in June 2020 to extend MetroWest Phase 2 to Gloucester. This means that there will be a half-hourly service between Bristol, Yate and Gloucester from May 2022.  WECA also support the re-opening of Charfield station south of Cam & Dursley.