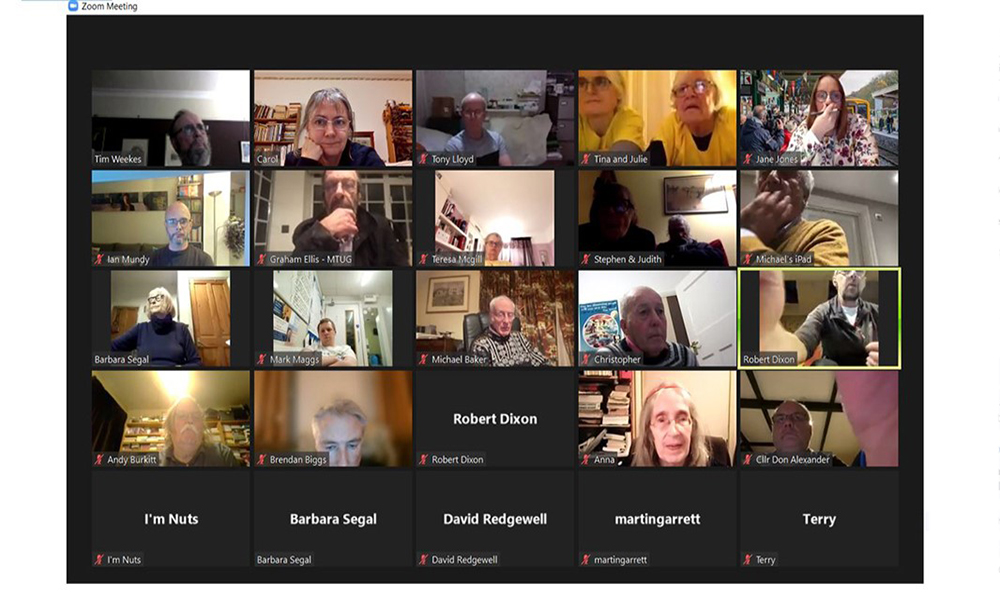 The Friends of Suburban Bristol Railways (FoSBR) Annual General Meeting was held via Zoom on 28th Jan 2022. This is a brief report. The formal minutes of the AGM can be downloaded here.

The Chair welcomed members, speakers and visitors to the meeting. There were 33 attendees. A FoSBR 2021 Roundup had been circulated with meeting papers.

December 2021 saw the introduction of a half hourly service on the Severn Beach Line, a long-term FoSBR
campaign. We marked this with a trip to Severn Beach, attended by the cabinet members for transport from
Bristol and South Gloucestershire.

We continued to campaign for better bus/rail integration, but continue to see little thought given to this important issue.

Work finally began on a new station at Portway Park and Ride, and we await the outcome of the Development Consent Order for Portishead.

FoSBR have worked with a number of other organisations to press for improvements such as a new station for Lockleaze, a full service for Pilning and more capacity on the Severn Beach line.

Looking forward, we are concerned that there is a risk of cuts to services and jobs, and delays to plans for new infrastructure. This seems to be driven by the Treasury, who are being accused of micromanaging the railway.

Jane explained how COVID-19 continued to have a major impact on services. During 2021 passenger numbers recovered to 76% of pre-pandemic levels, only to fall back to 40% due to Omicron.

Engineering works at Bristol East Junction have made it hard to measure passenger trends locally, but local suburban travel has stood up better than long-distance commuting. The new timetable on the Severn Beach line has improved reliability as well as providing more services.

Jane hoped that Malcolm Parsons, who is now Interim Head of Capital Delivery at WECA and who has considerable rail expertise, will help with the delivery of rail projects such as Portishead.

From April 2022 Bristol rail users will have access to tap-in, tap-out pay-as-you-go smartcards. A number of station improvements are planned for this year, and GWR supports FoSBR’s campaign for better bus/rail integration.

GWR will continue to receive emergency measures funding from the government until June. In the meantime, they are working with the Great British Railways transition team to help develop the future organisation of the railway.

GWR needs to build back custom, and needs help from FoSBR and others to encourage rail travel.

As Dartmoor Route Project Manager, Ian helped get the Okehampton line reopened for daily services. He has just started his new role in Bristol as New Infrastructure and Delivery Readiness Manager, which covers both new stations and new routes.

The new train service to Portway Park and Ride will complement the existing bus service, and will also be developed to serve local residents. The station will be able to accommodate 5-car trains, and will have a range of facilities including ticket machines.

During half-term week (19th to 27th February 2022) engineers will be completing works at Bristol East Junction, so it will not be possible to run trains on the Severn Beach line. Network Rail will take this opportunity to make necessary changes to signalling at Portway Park and Ride station, build station foundations, and do maintenance work in Clifton Down Tunnel.

You can see Jane and Ian’s combined presentations here.

Tim Weekes is a FoSBR committee member and FoSBR webmaster. He also liaises with Bristol Civic
Society through their Transport and Placemaking Group and represents FoSBR at the Sustainable
Transport Network.

Tim explained that FoSBR sees rail as the backbone of a sustainable transport system. FoSBR campaigns for an electrified turn-up-and-go (every 15 minute) service, with good links to bus, bike and walking routes and any future mass transit system.

Bristol’s railway corridors are a massively under-used asset. Unlike roads, where limited space has to be shared by buses, cars (parked and moving), cyclists and pedestrians, the railway owns its right of way.

Most of the re openings and interventions in FoSBR’s Plan for Rail are already sought by other campaigns and organisations. Some require relatively little funding; others such as four-tracking from Parkway to Yate would be complex and expensive.

You can see Tim’s presentation here.

Tony Lloyd paid tribute to Nigel Bray, who passed away in December 2021:

Nigel Bray was Secretary of the Severnside Branch of Railfuture and a staunch supporter of FoSBR, contributing regularly at previous AGMs.

Nigel had a life-long passion for the railways, and his rail career took him from Barnstaple to Weston-super-Mare, Paddington, Swindon and Gloucester. He wrote a series of definitive histories of rail lines in the South West which will long continue to be appreciated by those who read them.

Bernard Kennedy reported that the Avonmouth Bulk Handling Terminal is being dismantled along with the coal conveyor from Portbury to St Andrews Road so this may offer opportunity for the track to be re-doubled from Avonmouth to Hallen Marsh. This is relevant to earlier discussions around “Henbury Loop without a loop”.

Bernard also commented on what a challenging year it had been operationally for rail, with Covid staff absences. Bristol East Junction engineering over-run on weekend of 14th/15th August 2021, together with a tragic fatality on the M32, resulted in Bristol reaching a “standstill”.

Bernard announced a £300 donation from ASLEF to FoSBR – thank you ASLEF!