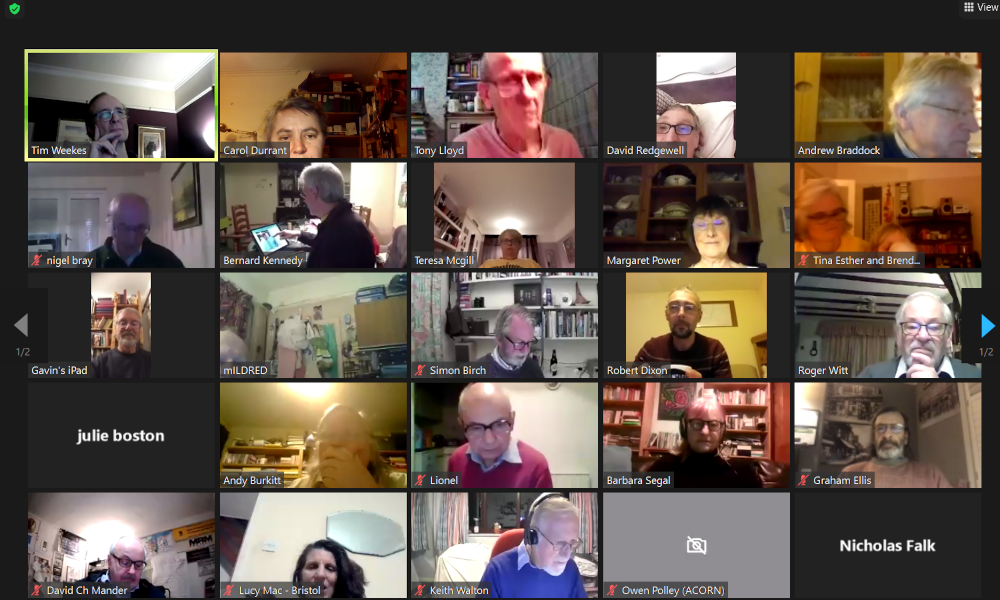 The Friends of Suburban Bristol Railways Annual General Meeting was held via Zoom on 29th Jan 2021. The formal minutes of the FoSBR AGM can be downloaded here.

The meeting was recorded, and can be viewed on the FoSBR YouTube channel. We’ve split this up so that if you’re just interested in, for example, one of the talks then you can easily watch just that.

Chair Rob Dixon welcomed members, speakers and visitors to the meeting. There were 36 attendees.

2020 has been dominated by COVID-19. Passenger numbers fell to a fraction of previous levels, but the Government recognised the importance of rail with Emergency Measures. Is this the end of franchising?

FoSBR has been active in remote meetings and on online social media and the website. Sadly our hopes of celebrating 25 years of FoSBR went the way of so many other arrangements, though Julie and Teresa arranged socially-distanced FoSBR Six trips out on local rail, when restrictions allowed.

In 2020 Andy and Tina left the committee, and we said a sad goodbye to our friend Mike Baker who did the locomotive artwork at Stapleton Road station.

Despite the pandemic, much progress has been made in 2020:

There are also issues we will need to address post-COVID. The government have simultaneously said they will “Build Back Better” whilst cutting rail infrastructure budget by £1billion. Some potential stations have not made it onto concrete local plans, eg, Coalpit Heath, Horfield/Lockleaze.

Passengers will need encouragement to return to rail – this will need very regular local services. Frequency of service is one theme of tonight’s meeting.

Nicholas Falk outlined how the planning process could be better used to improve connectivity.

Why planning fails to deliver better results in UK?

The system is reactive to development proposals, needs to be a community vision not “Punch & Judy”. If power is devolved to local level – to tie up development and infrastructure can be tied together, eg, Paris ZAC Claude Bernard – exemplary integration project, compared to disjointed Bristol’s UWE/M32/M4/M5 area.

Where could finance come from?

Concentration of growth around transit lines can be done in Oxford and also applies to Bristol; appropriate spatial planning can avoid flood plains and AONBs.

Post-COVID we may need to re-invent dying town centres, for this we need to combine: Action, Access, Attractions, Amenity, Agency.

Members suggested that the recording of Nicholas’s talk should be passed on to local leaders such as Bristol Mayor Marvin Rees, and North Somerset’s Don Davies.

Andrew Braddock: The Case for Trams

Trams are good for jobs, the local economy, sustainability, air quality and the local environment. Every Euro invested in public transport creates 5-5.3 Euro of added economic value, according to a German study.

In 1985 the French government initiated re-birth of the tram as a mode of transport by requiring all urban areas with population over 50,000 to produce a local transport plan. Plans were funded by state subvention but mainly by local transport tax on employers. Mayors act as a bridge between state government, local authorities and operating consortia. In France risk rests with the public sector, whereas in the UK the transfer of risk to private sector has resulted in repeated bail-outs.

The outcome is that in last 34 years, France inaugurated 28 new tram networks, with more on way. The average time from inception to start of service is 6 years, which compares extremely favourably with the UK.

Andrew’s advice to Marvin Rees (Bristol Mayor) is: don’t dig an underground. Public transport belongs in the streets, so take the private cars out. Tram introduction results in increased bus use due to interchange opportunities.

Trams are cheaper than buses in whole-life costs, as the major operational expenditure for buses is drivers in the relatively low-capacity vehicles.

Post-COVID congestion will be a problem, as will air quality, including ‘Oslo effect’ of non-exhaust particulates – another reason to develop trams rather than buses.

Gavin asked for a show of hands for those who have seen trams in UK. Edinburgh, Manchester, Sheffield, Nottingham, Birmingham and Croydon have tram systems, and Cardiff is planning for one. There was good response in meeting, but sometimes there is low awareness of tram resurgence.

TfGB have been working with ZeroWest and have produced a set of integration plans:

FoSBR is very focused on MetroWest but other corridors will need trams, e.g. Kingswood and South Bristol.

TfGB received a £28,000 grant to further plans from the Foundation of Integrated Transport. TfGB also received consultancy advice from the Light Rail Transit Association (LRTA) on how to make plans happen. The LRTA suggested a pilot line from a Park and Ride on the M5 to Cribbs Causeway, Southmead, Bishopston and a City Centre loop.

The Bath to Bristol corridor is also a priority. TfGB also envisage a tram-train coming from Thornbury-Yate, via Westerleigh, alongside the cycle path to Emersons Green, then running on-road around the ring-road and down the M32. TfGB also supporting re-opening Clevedon-Yatton rail link.

Members questioned whether FoSBR should match TfGB’s ambition by campaigning for a rail link from Yatton to Clevedon. Rob Dixon agreed that this should be discussed.

Dave Redgewell said that Marvin Rees’ focus is on the Bristol-Bath corridor or south Bristol corridor. These corridors can be converted from MetroBus to light rail, linking new housing developments in Whitchurch and Hengrove.

Members discussed and voted on the following resolution:

Although MetroWest is bringing much-needed and long-awaited train frequency improvements, FoSBR seeks a 15-minute frequency train service to all Bristol stations for a true metro-style service

These points were discussed, and the resolution was then put to the vote and passed by 13 votes to 4.

Bernard reiterated that COVID has severely disrupted rail services. Passenger numbers are down, service levels are down, TOCs have found it difficult to have available sufficient operational staff levels to maintain service, due to self-isolation and shielding. Training has also been difficult with social distancing impossible in a train cab.

Bristol East Junction/Bristol Temple Meads: this is a major project and the first time since the 1970s that the signalling has been renewed. The new Bristol East Gantry is already up. An extra line will be created so that the four Filton Bank tracks can continue into the station (rather than reducing to 3) plus the two lines from London. There will be disruption throughout the year but this capacity improvement is needed for the half- hourly service from Avonmouth to Westbury in December.

Bernard announced a £300 donation from ASLEF to FoSBR – thank you ASLEF!

Nigel asked the question: How do we attract passengers back to rail?

Keith picked up Nigel’s point that Community Rail Partnerships (CRPs) will market services when they are allowed to do so, with walks from stations, family outings and events on trains.

During COVID, Severnside CRP have continue to work with communities; issuing masks, engaging in artwork when possible, such as at Stapleton Road station. More artwork is coming in Fox Park under the 4-track bridge, sponsored by Network Rail.

There is now a community group for St Andrews Road Station. The Secret Garden at Avonmouth station has continued to produce food for local people and Avonmouth Community Centre.

The Severnside CRP Annual Report is due out at end of January.

Owen explained the work of ACORN, a member-led Community Union that tends to work with lower income communities. They have focused on tenants’ rights, council tax, local environments and public transport.

They do creative actions, such as their campaign for bus franchising in which they took to the streets with a large cardboard bus, and forming Bristol’s longest bus queue of over 100 people.

COVID has hampered campaigning, but ACORN are gearing up for WECA elections and looking forward to working with TfGB and ZeroWest.

Rob Dixon commented on how well PSG keep Pilning in the news, e.g. recent coverage in Bristol Post of Severnside “travel desert” and the under-used potential of Pilning station.

In a brief farewell speech, Tina spoke of her favourite FoSBR moments over the last 10 years, and recommended that people step up to offer any skills they have to FoSBR. She has found local railway campaigning fun and rewarding, and it has yielded results – such as four-tracking on Filton Bank!

Tina was delighted with her farewell gifts from FoSBR – a FoSBR-yellow cup and saucer, and a jigsaw puzzle version of the FoSBR Plan for Rail!