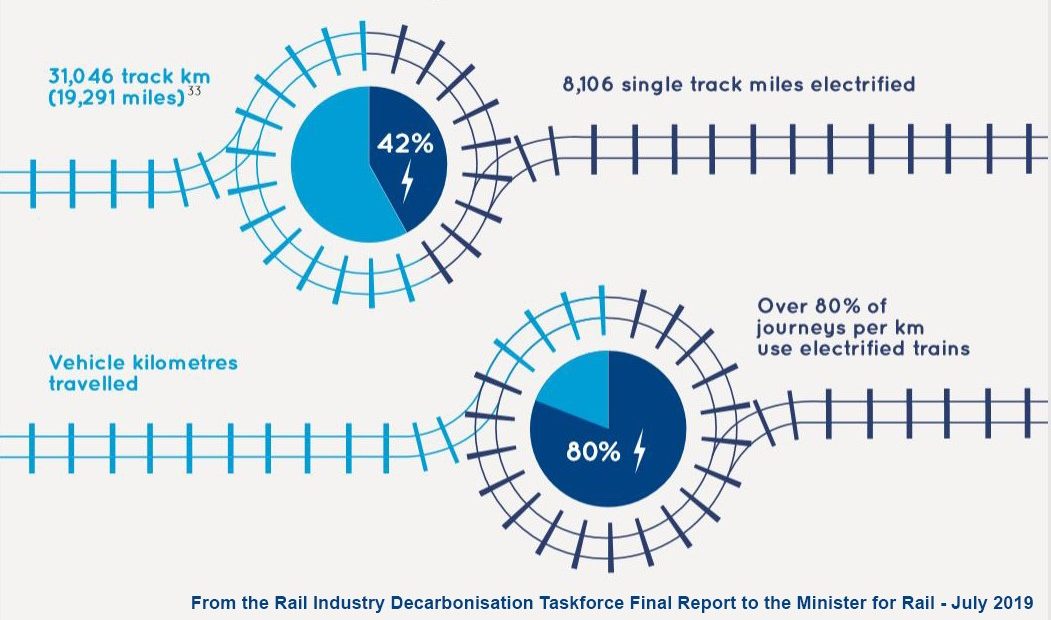 In 2016 the electrification of the Great Western Mail Line (GWML) from Bath to Bristol and from Bristol Parkway to Bristol Temple Meads was deferred due to cost over-runs. But government policy calls for the decarbonising of rail. What does this mean for us in Bristol?

Under the section on “Connectivity beyond the West of England” the report states that:

“The full electrification of the Great Western Main Line to Bristol Temple Meads, via Bath Spa and Bristol Parkway, remains an aspiration, as does the extension of electrification from Birmingham to Bristol and on to Weston-super-Mare. As well as delivering a carbon neutral network it will bring benefits to long distance services and provide the longer-term opportunity to link into HS2.”

Additionally, the section on “Connectivity within the West of England” indicates that WECA will work on a

Research has been carried out on why the Great Western Electrification Project ran over budget. In March 2019 the Electrification Cost Challenge review concluded that better planning, less contention for resources and a long-term commitment to a rolling programme could reduce the cost of overhead line electrification between 33% and 50%.

Other reviews report that electrification costs could be reduced through discontinuous electrification, which requires some form of on-train energy storage.  This would help on routes with obstacles such as older bridges and tunnels.

Bi-mode Hitachi inter-city trains currently run under diesel rather than electricity along the Bath-Temple Meads and Parkway-Temple Meads urban corridors. Our regional and local routes are served by old diesel trains through areas that are sensitive to exhaust emissions and noise.

In a speech in February 2018, Jo Johnson (then transport minister) called on the rail industry to draw up plans to phase out diesel-only trains by 2040.  In response to this, the Rail Industry Decarbonisation Taskforce (RIDT) delivered its Final Report to the Minister for Rail in July 2019.  This report concluded that elimination of both diesel only and bi-mode diesel (passenger) trains is needed for rail decarbonisation in support of  the UK government’s 2050 net zero carbon targets.

Trains with speeds above 160km/h are hard to replace with low carbon alternatives outside of electrification. The RIDT report suggests that, to achieve net zero carbon by 2050, it may be necessary to electrify about an additional 4,250 route km nationally (see note 1). Network Rail’s Traction Decarbonisation Network Strategy will report back with more detail in October 2020.

Typical train life is of the order of 30 to 40 years, so rolling stock procurement today will define the mix of traction in place by 2050.   Aside from overhead electrification, battery and hydrogen are the only net-zero technologies which are likely to be readily available in the time frame.  Battery electric technology is already attractive, but from the year 2030, hydrail is expected to be the best overall option, particularly for longer range journeys. Hydrail requires extensive (and expensive) infrastructure for mass production and distribution of hydrogen.

Other emergent technologies may mature by 2050 but biofuels in surface transport are not a long-term solution.  The Committee on Climate Change has stated that the best function of biomass is to permanently remove and store carbon. Biodiesel will not be available in sufficient quantities.

It is useful to explore the industry definitions:

The report cites several examples of battery electric trains in commercial operation in Japan since 2014, the batteries being used as range extenders (up to 26 km) onto non-electrified line with pantograph re-charge at end of the line.  Many other electric/battery hybrid trains are in prototype, passenger trials and now in production in Germany, Austria and the UK.

Closer to home, Transport for Wales have ordered Fast Light Intercity and Regional Train (FLIRT) units from Stadler for the Cardiff Metro. The tri-modes will run from OHLE, diesel and battery power and will be deployed from 2023.

Propulsion will be diesel from Cardiff Central to Barry, Penarth and Bridgend.  On the Rhymney to Cardiff Central route the traction will be electric 25kv overhead, the total distance being 37 km.  Battery power will be used under road bridges to avoid rebuilding inconvenience and cost and also through the Caerphilly tunnel, tunnel length being 1.75 km. With this limited use of battery power, recharge can be facilitated from overhead or from wheel turn so no operational time is lost.

Some of our local bi-modes and tri-modes can be viewed as transitional solutions, such as the bi-mode OHLE/diesel Hitachi IETs, and the tri-mode OHLE/3rd rail/diesel Flex 769 train conversions that GWR are deploying in the Thames Valley.

If Birmingham to Somerset and Bath to Bristol were electrified, our MetroWest network would benefit from significant distances under wire.  The last sections of the branches to Severn Beach (23km from Bristol Temple Meads), Portishead (19km from Temple Meads) and Henbury (13km from Temple Meads) would need alternative propulsion.

The government has issued legally binding carbon targets to achieve net zero greenhouse gas emissions by 2050.  The rail industry can be a major contributor to ensuring the UK plays its part in limiting the global rise temperature to 1.5° Celcius. The Williams Rail Review is evaluating the organisational and commercial framework of the whole rail industry to unlock a new generation of investment and innovation in UK railways. Against this background, WECA’s low carbon rail priorities look urgent but achievable.

(2) A electrified train trip from Paris to Bordeaux emits 8.8g CO2 per passenger/km – in France about 75% of electricity comes from nuclear power, whereas a journey from Gdansk to Katowice emits 133g CO₂ per passenger/km – in Poland about 80% of electricity comes from coal. UK electricity generation (2019 Q3) is made up as follows: 39% coal, oil and gas, 20% from wind, 12% from biomass, 6% from solar, 19% from nuclear (carbonbrief.org).