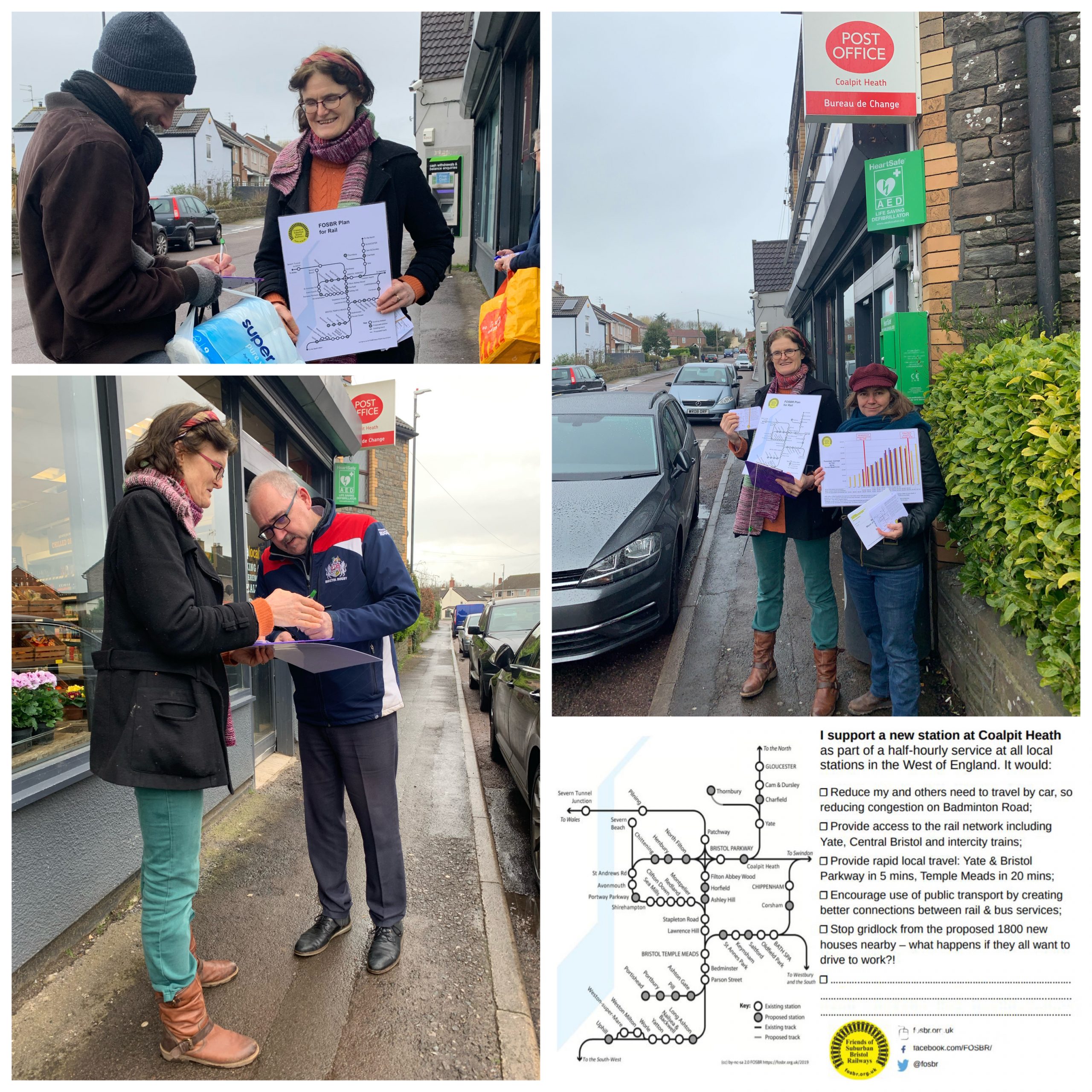 FoSBR have long advocated an additional station to the north-east of Bristol. The most promising locations are Winterbourne or Coalpit Heath, both of which had stations serving passengers until 1961. Both old station sites are on the Bristol Parkway to Paddington main line, so would need passing loops to allow fast trains to overtake stopping trains.

In our newsletter summaries of station re-opening potential in 2016, we came to the conclusion that Winterbourne was not an easy location as there was no potential for passing loops.  East of the station, the line crosses the Winterbourne viaduct, whilst west of the former goods yard (now Travis Perkins) the line is in a cutting.

Coalpit Heath looks like a more promising location, so we have included it in our Plan for Rail.

The Coalpit Heath station site (on the down line towards Bristol) now forms the Ram Hill Business Park.  On the opposite side of the track, the remains of the old up platform can be seen. It might be possible to install passing loops/platforms and there is spare land on both sides, assuming the business park can still be accommodated.  As housing in Coalpit Heath is some way from the station, car parking would be needed – unless a shuttle bus could be provided, potentially from Coalpit Heath, Winterbourne and Emersons Green.

On Wednesday 4th March 2020, Tina and Carol went to the village to see if there is local support for a new station at Coalpit Heath.  Despite the drizzly conditions, locals were happy to stop and chat outside a local supermarkets in the village centre. The area around the old station is well known locally as many people run or walk their dogs near Ram Hill.

We received variable response to our proposals:

My husband works in Bristol city centre, it is difficult to commute by bus as the buses get delayed on the ring road, train to Bristol Temple Meads would be better [Note: Coalpit Heath bus service to Bristol comprises Y1 via M32 and Hambrook, Y2 via Eastville, Fishponds and Downend, Y4 via Stapleton and Frenchay].

I travel into Bristol regularly for Bristol Bears matches, a train journey from Coalpit Heath to Parson Street, or even better Ashton Gate would mean I could have a drink!

In 1951 I travelled to the Festival of Britain by steam train from Coalpit Heath on an outing with the Manor School.

I’d love to get out and about on the train, for leisure

Too much money is spent on public transport, the council needs to fix the potholes in the road before I break my axle.

There are already too many trains running too fast along the viaduct at the end of my garden, the electric ones are just as noisy as the diesel trains.

A new station would result in more traffic [to the station], the roads are full already.

The old station buildings are used by local businesses [Note: new stations tend to only have  platform shelters, but some of the car parking space might be lost].

If we get a new station, the council will be more likely to build the threatened 1800 new houses.

We stayed until the rain was blurring the signatures, but 40 supportive campaign cards signed and some insight into local opinion felt like a worthwhile outcome to the day.

Thank you, Coalpit Heath, for being so friendly!  We need further local input so if residents have comments, please contact us via the website.