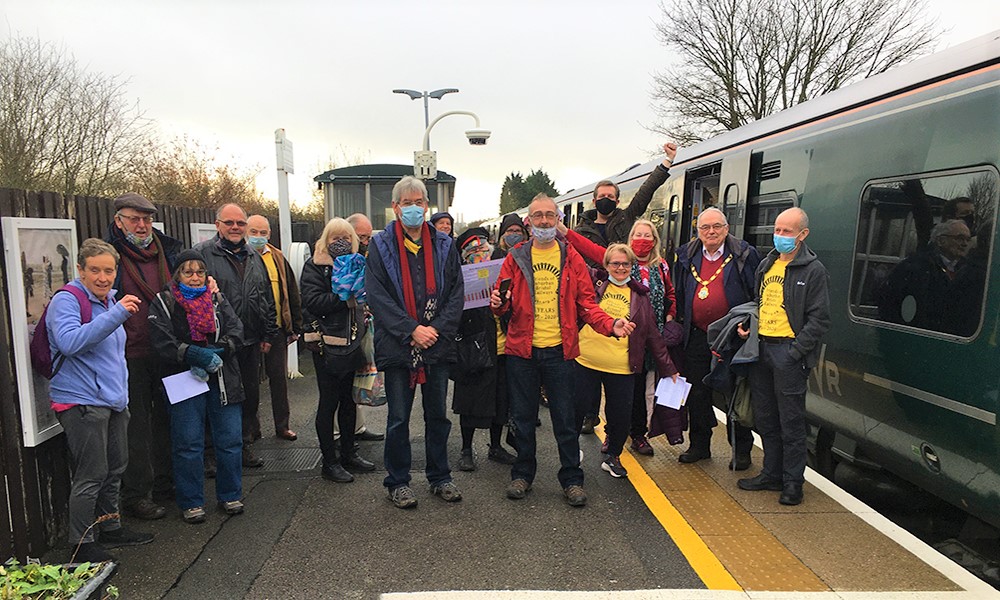 FoSBR held a successful event at Severn Beach on Sunday 12th December celebrate the start of the new timetable on the Severn Beach line. On weekdays there are now two trains per hour to Avonmouth, with hourly trains to Severn Beach. Many trains are now extended to Weston-super-Mare, providing a cross-city service.

There we were greeted by Councillor Peter Tyzack, leader of the Pilning and Severn Beach parish council, for photos and a celebratory song. We then enjoyed refreshments at Shirley’s café.

Sunday was the first day of the new timetable and also sees something else that FoSBR has been campaigning for over many years – regular cross-city services. Together with other more regular services, this will allow better connections around the area.  We were joined by residents from South Bristol who found it easier to attend as they could join the train at Parson Street station.

We were keen to mark this change, which is the first step towards MetroWest’s half hourly services at most local stations. It is a step change in local rail services. It will allow us to travel more easily, such as to work in Avonmouth or for leisure visits to and around the city. At the moment it is difficult to get to Severnside by public transport as journeys are long and irregular. If we want to reduce congestion and avoid worsening climate change we need public transport that provides a convenient alternative and encourages people to switch from using their car. For those who can’t afford to drive this will provide opportunities for work that they could not access before.  It is only 27 minutes from Temple Meads to Avonmouth and 22 minutes from Parson Street to Clifton Down

Councillor Don Alexander said, “I warmly welcome the improved service. This will offer the opportunity for people to get to and from Avonmouth and Severnside more easily and to interchange with buses at the park and ride at the new Portbury P&R station which will soon be finished. This is good news for residents, commuters, businesses and the planet!”

As well as expressing great pleasure at the improved Severn Beach line timetable, Councillor Tyzack talked of the number of jobs in Severnside and the importance of people being able to access these. He linked this to the need to reinstate the bridge at Pilning station, which would provide access from South Wales and other parts of the West of England.

Councillor Steve Reade said, “I am extremely pleased that sustained pressure from local people, FoSBR, South Gloucestershire and others has resulted in these rail improvements. It demonstrates what can be achieved when the community makes itself heard and works together.”

GWR organised a photocall with MetroMayor Dan Norris to “despatch” an early service on Monday 13th December before, unfortunately, driver shortage caused the cancellation of two subsequent services out of Temple Meads.

Dan Norris said “I’m delighted to be travelling on one of the first new services from Temple Meads to Severn Beach.  This is the first important piece in the MetroWest jigsaw. The MetroWest initiative will reopen two lines and up to six new stations by 2024. It’s going to give 80,000 more people access to train services.”