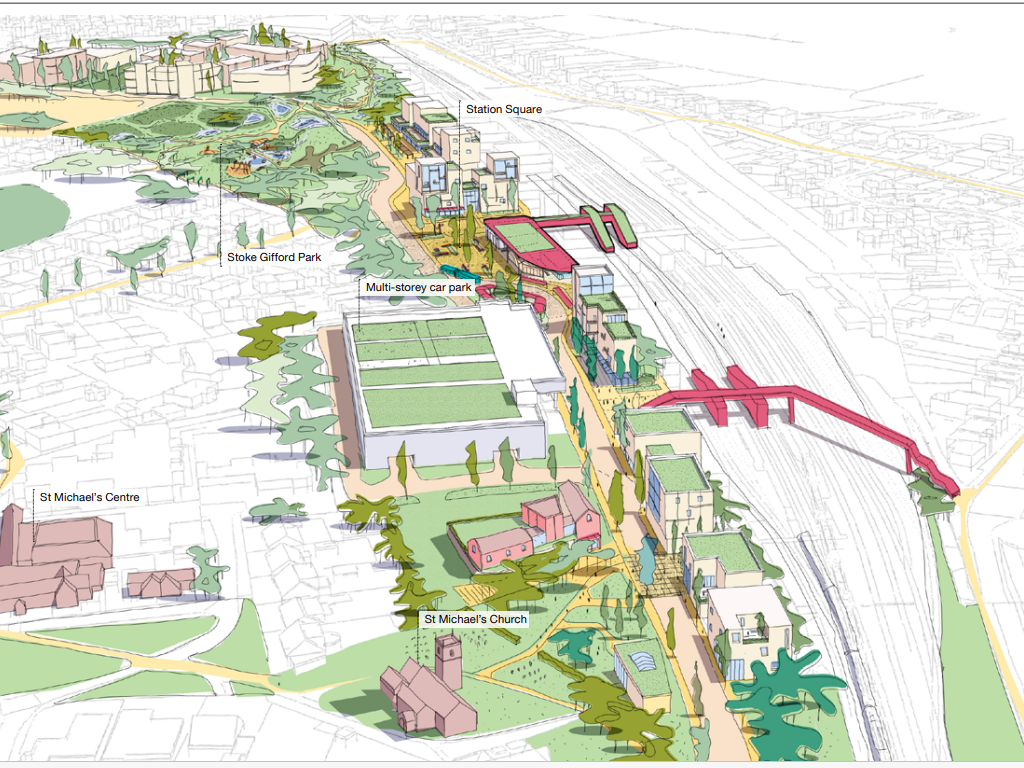 South Gloucestershire Council, working with Network Rail, Great Western Railway and the West of England Combined Authority, are preparing a strategic masterplan to turn Bristol Parkway into a ‘Living Station’. This will transform the station from a car-centric out-of-town park and ride into a 21st century transport hub.

We have already seen plans to make Yate train station into a ‘Living Station’, but the plans for Bristol Parkway take the concept even further.

The objectives of this masterplan are to:

Since Bristol Parkway opened in 1972, it has given its name to a generation of car-centric ‘park and ride’ train stations. The station was even named after a road: the M32 Motorway, which was originally known as ‘The Parkway’ presumably because it cut through the historic landscaped grounds of Stoke Park.

The masterplan sets out to redesign Bristol Parkway station as a fitting gateway to Bristol’s thriving North Fringe. A key aspect of this is to make the station and its surrounding area the centre of a 15-minute neighbourhood. New homes, workplaces, community facilities and open spaces will be built in the immediate area, which will be more densely developed. Better connections will make the station more accessible on foot and by bike, bus, taxi and other ‘shared mobility’ options.

When it was built, the existing station building was a huge improvement on the prefabricated CLASP buildings that stood at Bristol Parkway until 2001. However access to platforms is via a single footbridge, which leads to congestion.

The masterplan proposes that the station building be moved about 150m to the east of its current location. The old building will remain in use while the new one is built, minimising disruption. The new location may incorporate a new Platform 0, giving extra capacity for London arrivals.

The existing footbridge will be extended to the south, allowing for a new station entrance from the Church Road – Westfield Lane roundabout. This arrangement will spread out passenger access to platforms. Drop-off facilities will be available at this entrance, as well as active travel options.

The masterplan prioritises pedestrian and cycle movements, and tries to avoid conflicts with other road users.

From the north, a new route from Brins Close will complement a network of walking, cycling and wheeling routes. A new subway alongside the Hatchet Road bridge is also proposed. Wide, safe crossings will be provided at key locations, and a new prioritised 3m wide cycle path will cross the site from east to west.

The new station will feature a shared mobility hub with parking for e-bikes and cargo bikes as well as regular bicycles. E-bike and e-scooter hire will also be provided. A smaller mobility hub will be provided at the southern entrance at Church Lane – Westfield Lane.

There is currently over-provision of car parking space at the station. The station’s catchment area is increasingly local, so by improving links to the station for non-car users it will be possible to further reduce the need for car parking space. These plans will, at least initially, retain the existing multi-storey car park. But other car parking areas will be released for development. The parking decks to the east of the current station building will be removed, and redeveloped into a new station building and neighbourhood centre, Station Square.

The primary entry point to the station area for private cars, currently from the west, will change to the east, where the road network is better suited. As now, private cars will not be able to drive through the site.

The scheme will be delivered in phases, dependent on funding. The phasing may be as follows:

In the early stages of this project, the current surface parking area to the west of the station at St Michael’s Green may become available for development. A new underpass at Hatchet Road could be delivered at this time.

Land to the east of the station could also come forward in the early stages, together with plans to enhance Stoke Gifford Park. Although these changes will not change the station, they will start to change perceptions of the area.

The Training Centre will be relocated elsewhere, and the decked parking area cleared. The existing station will remain in use while the new interchange is developed.

The east-west ‘street’ is completed, providing cross-site links for buses, wheelers and walkers. New buildings along this street will add to the sense of place.

Various options are being considered to deliver and fund this masterplan. Probably a hybrid approach will be used, where stakeholders such as the rail industry, private developers, Private Finance Initiatives, central and local government all contribute. The choice of funding model, together with the outcome of public consultation, will determine how quickly this scheme can be delivered.

If you wish to comment on this masterplan, visit South Gloucester’s Bristol Parkway Station and Surrounds Masterplan web page. The consultation closes on 14th August 2022.

FoSBR’s response to the consultation is here.