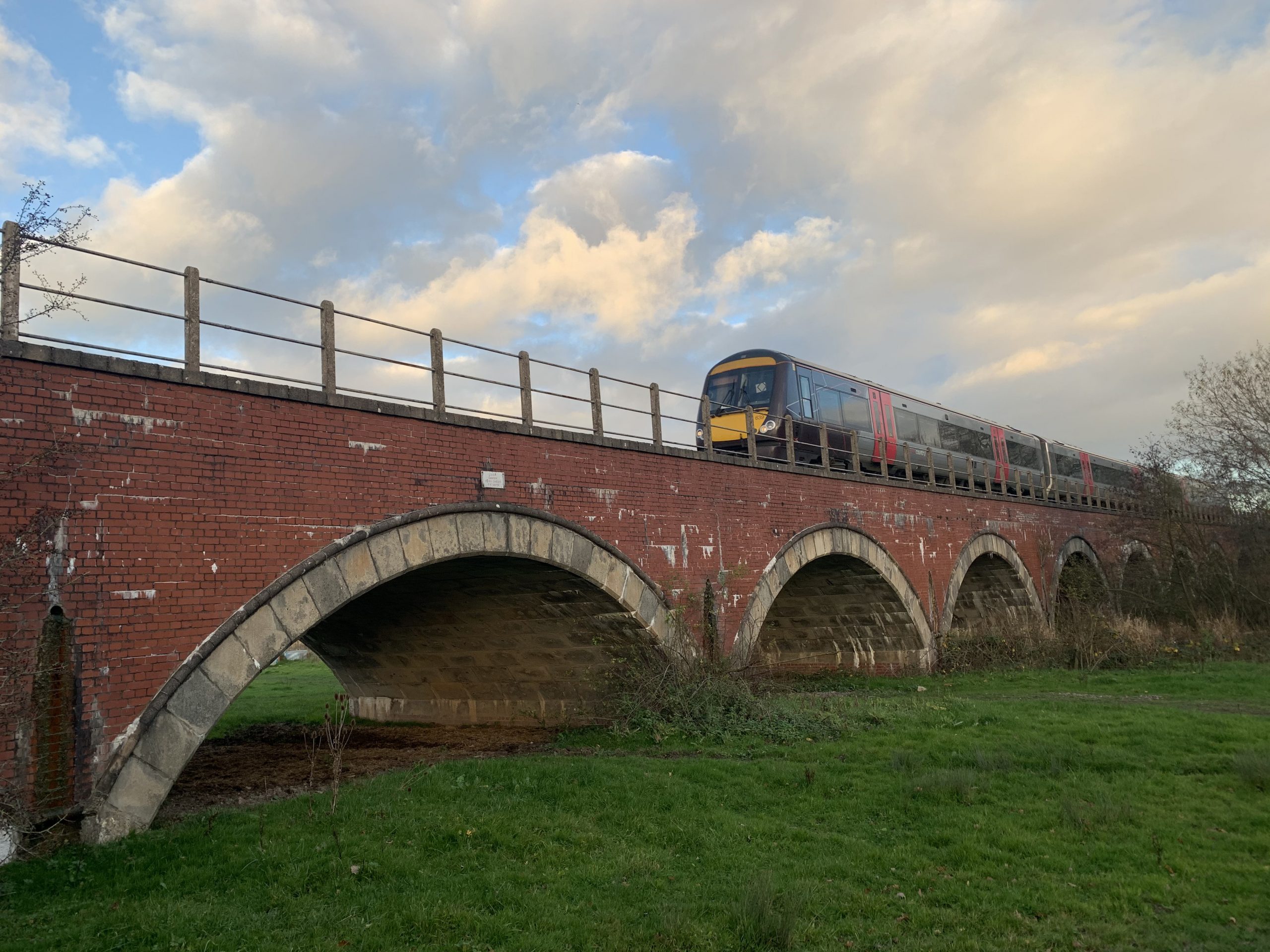 Gloucester is less than an hour away from Bristol by train, so it’s a convenient destination for a day out (when lockdown regulations allow).  This walk around Gloucester is a distance of approximately 8 km. It takes in three friaries, Gloucester Docks, Alney Island Nature Reserve and plenty of transport infrastructure.

Leaving the railway station (1), you will see the interesting bus station (2) which opened in 2018.

From the opposite side of the bus station, follow Clarence Street south, then continue along Brunswick Road.

Just after the Gloucester Library building, turn right towards Greyfriars.

After 150m on the right are the remains of the early Tudor friary church of the Franciscan Greyfriars (3), founded in the 13th century and re-built in the 16th century.

On the left  is one of the most complete surviving 13th century friaries of the Dominican Blackfriars (4) in England, later converted into a Tudor house.  It is now run by Gloucester City Council as an events venue.

Turn left down Ladybellegate Street which leads towards the docks.

Gloucester Docks (5) main basin is the terminus of the 16 mile long Gloucester to Sharpness Canal. The ship canal was opened in 1827 and was built to allow ships to bypass a difficult winding stretch of the river Severn, allowing Gloucester to become Britain’s most inland port.

Large sea-going ships could offload their cargoes so they could be transported by barge on the River Severn up to the Midlands.

In its heyday the basin would have been extremely busy with ships – sailing ships, steam ships, barges, and narrowboats – carrying timber and grain. All around this area there would have been a hive of activity, with local saw mills, corn mills, workshops, rope makers, and sail makers.

There is still plenty to look at in the docks with views of fine warehouses and miscellaneous boats.  In normal (non-COVID) times there are two museums in the docks area: the National Waterways Museum and the Soldiers of Gloucestershire Museum.

The area around Llanthony Secunda Priory (7) was landscaped as part of a Heritage Lottery transformation in 2018.

Llanthony Secunda is a former Augustinian priory founded in the 12th century as a haven for monks from Llanthony Priory in Wales.

The brick Victorian farmhouse was built around the footprint of a previous farmhouse and a medieval gate passage.  The adjacent wooden-framed medieval range was originally for livestock, but has served many purposes over the years.  These buildings are accessible on open days and also available for event hire. The site also contains the remains of a 15th century tithe barn.

For a shorter walk, return via the dockside path following signs to the city centre.

For the longer walk, leave the priory grounds by the rear gate that leads onto the A430 Llanthony Road.  Cross to the opposite side of the road, and follow the road north across the Severn.  100 metres after the bridge a path angles back to join the footpath/cycle path that follows the north bank of the Severn.

Follow the cycle path and look for the old railway bridge on the left.  Passing underneath this bridge, the footpath follows the basin of a disused lock (8) that was built to allow boats to navigate round the weir on the River Severn, and is still, technically, a legal right of way for river traffic.

Llanthony Lock was purchased by the Herefordshire and Gloucestershire Canal Trust in 2008 to restore the link between that canal and the upper reaches of the Severn (above the weirs) and also to Gloucester Docks and the Gloucester and Sharpness Canal .

The footpath follows the river north, but it is often boggy so it may be better to retrace your steps under the railway bridge to the cycle path and follow this north. (The footpath and cycle path converge at the north of Alney Island.)  The cycle path broadly follows the route of the old railway line (9). This branch line of the railway was opened in 1854 and used to carry Forest of Dean coal from the Lydney-Gloucester line to the docks.

You are now passing through Alney Island Nature Reserve between the west and east channels of the Severn.  The nature reserve is predominantly flood meadows with broadleaf trees. The land is managed through hay cutting and grazing with rare breed cattle. Wildlife includes orchids, waterfowl, raptors, amphibians, wading birds and many species of insect.

Ahead of you is Over Bridge (11), which is a stone road bridge designed by the famous Scottish civil engineer Thomas Telford.  It was completed in 1829 replacing an 16th century bridge.

Until the Severn Bridge was built in the 1960s this was the lowest point downstream that the Severn could be crossed by road bridge.  Today it is a pedestrian and cycle bridge.  Road traffic crosses the Severn on the new A40 bridge to the north.

This leads to Westgate Street and the town centre.  By turning left into College Street, you can pass through the nicely landscaped grounds of Gloucester Cathedral (15), exiting via the entrance at the east end onto St Johns Lane and then Northgate Street.